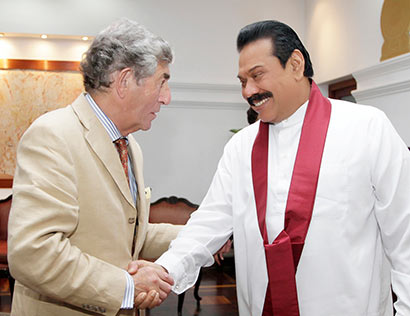 “During my visit to all parts of the country, North, East, South, and West I was able to speak freely and openly with ministers, government officials, religious leaders, and most importantly ordinary citizens from all sections and walks of life. What struck me particularly was that the military presence in the North was substantially less than what has been often portrayed,” says Lord Rogan of the United Kingdom.

He expressed these views when he met President Mahinda Rajapaksa at Temple Trees this evening (04). Lord Rogan of Lower Lveagh, member of the British House of Lords and Vice Chairman of the British – Sri Lanka Parliamentary Group has just completed a seven-day fact-finding visit to Sri Lanka. He is also a member of the Ulster Unionist Party (UUP) of Northern Ireland which is currently a coalition partner with the ruling Conservative Party.

“Sri Lanka must be recognized as a country coming out of an armed conflict spanning a thirty year period which cost around 100,000 lives. Since 2009 much has been achieved in Sri Lanka – the government has policies to achieve more. I was happy to note that there is religious and ethnic harmony,” he further said.

“I found that peace has descended on this pleasant land and that development and prosperity are continuing to grow a pace. Having lived in Northern Ireland during our troubles, I know how easy and wrong it is for outside commentators to make snap judgments (often-on poor and wrong information) on the situation in our two countries. We suffered because of this – as you are doing today. Commentators from the outside world should realize it takes time, energy and commitment to achieve the ideals set out by the Sri Lankan Government,” Lord Rogan observed.

President Rajapaksa said that the government has spent around 3 billion US dollars for development of the North since the end of the conflict. “This is higher than what has been spent for the South. The type of modern health and hospital facilities provided to Jaffna are available only in few cities including Colombo in the rest of the country,” President pointed out.

“The Sri Lankan President, Government, and Peoples must be given both space and patience by the outside world to fulfill their plans. The forthcoming CHOGM Conference is a golden opportunity for the peoples of Sri Lanka to show the true picture of life in their post-conflict country. Dialogue and Diplomacy are fundamental to the way forward for lasting peace and prosperity; thankfully I have experienced many examples of both,” said Lord Rogan. 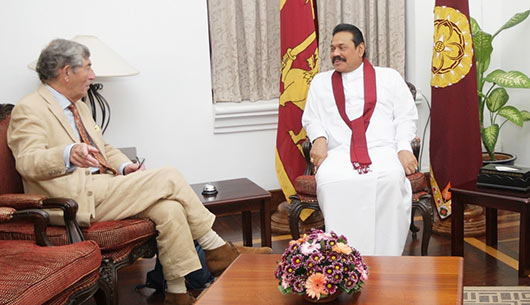