Mulleriyawa shooting: The two sides accuse each other 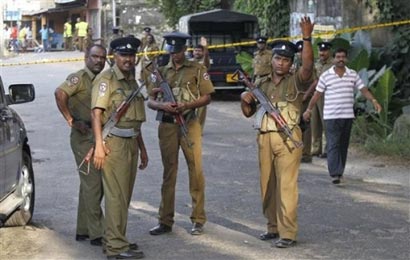 Sanjeewa Bandara, an eye witness to the Mulleriyawa shooting incident said that supporters of MP Duminda Silva opened fire at late MP Bharatha Lakshman Premachandra felling him, in front of police officers on the day of polling.

The eye witness, who is a supporter of Mr. Premachandra, said that Mr. Premachandra had been shot a number of times, but none of the police officers on duty in the area had come to his aid or even to take him to hospital.

He said, “When we were engaged in election activities with Mr. Premachandra, we got news at about 3.30 pm that some supporters and the wife of the Prasanna Solangaarachchi, the chairman of the Kotikawatta and Mulleriyawa Pradeshiya Sabha, were being assaulted with clubs by Mr.  Duminda Silva and his supporters near the old Angoda Police Station. Bharatha Lakshman decided to go there. We went with him to the place in question by the old police station on the Himbutana road.

Near the Sirimavo Bandaranayake Library in Walpola we came upon Duminda Silva and his group who were coming from the opposite direction in vehicles.

They stopped; blocking our vehicle.

Duminda got out from his vehicle and came towards us. He abused Bharatha Lakshman in indecent language. The he struck him and pulled him out of the vehicle. Then the two struggled and Bharatha Lakshman fell on to the ground. Then Duminda asked his companions too shoot him. Duminda’s security personnel started shooting at Bharatha with T-56 rifles. They fired at us with about ten T-56 rifles. Nobody came to take Bharatha to hospital. There were police officers present but none of them helped take him to hospital.

With much difficulty we took him to the I.D.H. Base Hospital. We heard later that he had died in the intensive care unit.

A businessman who witnessed the incident said, on condition of anonymity, “I saw Duminda Silva and Bharatha fighting on the road. During the fight Bharatha fell down. Then a volley of shots were fired from both sides. Both Bharatha and Duminda were injured in the shooting.

He added, “I was near the Sirimavo Bandaranayake Library on the Himbutana road in Walpola. Duminda Silva and his companions were travelling towards Himbutana in a convoy of vehicles. Bharatha and his companions were proceeding from Himbutana towards Angoda. The two convoys met. Both Baratha and Duminda got out of their vehicles and began abusing each other in indecent language. This turned into a brawl soon. An exchange of gunfire followed. Who started the firing was not clear. I saw Bharatha being shot. Both Bharatha and Duminda fell to the ground. Their supporters took them to hospital.

12 Responses to Mulleriyawa shooting: The two sides accuse each other

Home » Mulleriyawa shooting: The two sides accuse each other