Muslim political parties striking deals with TNA – how many remember Palliyagodella, Kattankudy and other LTTE massacre’s? 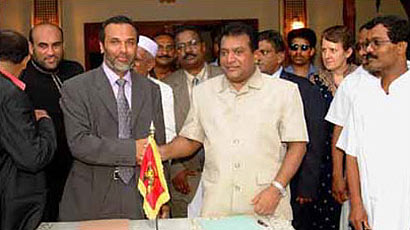 The ties between SLMC-LTTE-TNA are longstanding and raises how far ordinary Tamils and Muslims are aligned to the deals arrived at by these groups for personal gain which have nothing to do with any national or ethnic interests. The 2002 Prabakaran-Hakeem pow-pow is considered no different to the current discussions afoot to form a Tamil National Council. All these seals of joint cooperation comes with the knowledge that the SLMC and the ACMC are working with the very entities that annihilated entire Muslim villages changing the demography by bloodshed. The Muslims of all areas are in fact asked to take cognisance of the challenges that face the Muslims globally most of which are of their own making and to ask how much of which can be applied to Sri Lanka.

The prima facie case for LTTE and Prabakaran to engage Hakeem was because he was the perfect man to ‘do business’ with and Hakeem’s actions and inactions were motivated by the ‘profit’ that would ensue personally to himself – just what the LTTE wanted.

If LTTE agreed in 2002 to allow Muslims to resettle in areas that they were chased out from why has the Muslim political parties and leaders not demanded the action of this agreement. Its 2014 – how many of the Muslims chased out by LTTE have been allowed to return to their ‘homes’ and how far have the Muslim leaders demanded the TNA to honor the agreement instead of striking other agreements that benefit the two politically?

It is also noteworthy to wonder how much of the 2002 Hakeem-Prabakaran tete-a-tete had anything to do with the 2003 Oluvil Declaration wherein the Muslims are seeking a separate Muslim state in the East. These demands call to mind the golden words of Anagarika Dharmapala in 1927 wherein he predicted just what the Tamils and Muslims are now demanding and also predicted that the Sinhalese if not awoken will end up in the sea!

Thus we have the Tamils seeking separation through the Vaddukoddai Resolution and the Muslims attempting to do the same via the Oluvil Declaration. Both seeking ‘traditional homelands’ ‘separate self-autonomy’ claiming ‘own identity, religion and culture’. With both seeking the same in the North and East it has been a shrewd endeavour for political parties of both ethnicities to carry out a dual campaign in a joint effort though we know the ultimate penultimate may end up a totally different plan altogether.

All these leaders are vying for political solutions using Sinhalese, Tamils, Muslims, Buddhist, Hindu, Islam, Christian/Catholic tags to tap into the emotions of the masses but end up drawing up plans and plots only to fool the masses.

While the general public is aware of the ways of politicians, the voting public need to be far more intelligent than they are in considering who to vote for.

With the likelihood of more agreements between the minorities taking place it is good to revisit some of the massacres that the LTTE have committed to simply ask how short people’s memories are.

How many Muslims remember and wish to demand justice for the massacre of their own people:

LTTE did the same to the Sinhalese.

May 1985 – 146 Sinhalese men, women and children massacred when they hijacked a bus and drove it to the sacred Sri Maha Bodhi in Anuradhapura firing at people in prayers.

May 1995 – 42 Sinhalese men, women and children massacred in a fishing village, Kallarawa, Trincomalee

Sep 1999 – over 50 men, women and children hacked to death in Gonagala in Ampara district

While the list is longer the last attacks were in May 2006 first in Omadiyamadu, Welikanda and thereafter on 15 June 2006 in Kebithigollewa where 64 people including 15 school children and several pregnant women and a Bhikku were killed by the LTTE. Then on 3 August 2006, 3 schools in Muttur were bombed, on 5th and 12th April 2007 in Vavuniya LTTE killed 7 storming the village of Aralaganwila and Paleuruwa. On 5 Dec 2007, Kebithigollewa was again attacked when a massive bomb targeted a civilian bus killing 16. Thereafter on 16 Jan 2008 over 28 school children were massacred in Okkampitiya, Moneragala. The last was on 21 February 2009 in Kirimetiya, Ratmalgaha Ella in Inginiyagala Ampara when LTTE stormed a Sinhalese village and indiscriminately fired at a farming community killing 21. These LTTE massacres all fall within the period the UN is mandated to investigate.

While the Sinhalese race has been the majority indigenous race for centuries and can with evidence show that the Sinhalese language is rooted in Sri Lanka alone, Tamils have made their home from immigration from India while Muslims first came as traders and out of the generosity of the Sinhalese kings were given the right of stay – thus both minorities have no right to claim ‘traditional’ homeland.

Maybe it is a good time for the Sinhalese to establish entire Sri Lanka as their traditional homeland too!

2 Responses to Muslim political parties striking deals with TNA – how many remember Palliyagodella, Kattankudy and other LTTE massacre’s?