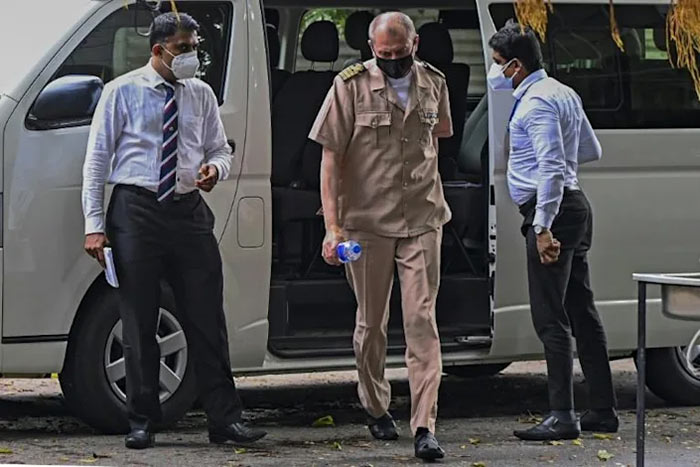 The Colombo High Court yesterday released the Captain of the wrecked Singaporean-flagged container vessel, the MV X-Press Pearl, on a Rs. 2 million personal bond and ordered him to surrender his passport to the Courts.

Capt. Tyutkalo Vitaly, a Russian national, was arrested last morning by the Criminal Investigation Department (CID) before appearing before the Colombo High Court.

The X-Press Pearl’s captain, chief engineer and second engineer are already listed as suspects by the CID in an ongoing investigation into the incident which experts have called “possibly the worse maritime environmental disaster the nation has faced, up-to-date”. The CID has also obtained travel bans for the 25-member crew of the vessel.

The Colombo High Court also issued an order to the Department of Immigration and Emigration, informing them that Capt. Vitaly cannot leave the country without the court’s permission.

The X-Press Pearl was carrying 1,486 containers, including chemicals and plastic nurdles, and caught fire in the anchorage 10 nautical miles north of the Colombo Port on 20 May. The vessel has partially sunk at a depth of 22 m with local and foreign experts monitoring the wreck for a potential oil leak that environmental specialists say can compound the environmental damage already caused by the incident.

However, according to the Marine Environment Protection Authority (MEPA) which coordinates the NOSCOP and marine environmental disaster response, there is no oil leakage from the wrecked vessel as of last night.

According to the Ministry of Justice (MOJ), three experts from the United Nations will arrive in the country shortly to assist in assessing damage from the incident. The UN assistance comes following a discussion between the Government and the organisation’s permanent representative in Colombo.

The MOJ is coordinating the damage assessment from the incident and last week appointed five committees to assess damages to the marine environment, fisheries industry, short-term and long-term impact on the economy, and to calculate the cost incurred by the respondents to the fire-stricken vessel. The filing of claims relating to the incident and related damages will also be coordinated by the MOJ.