My World Cup career is over 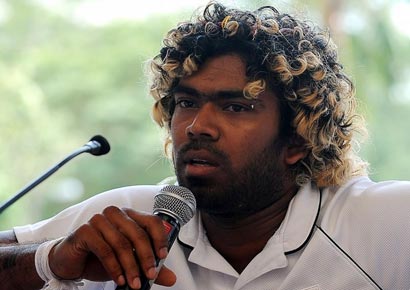 Fast bowler Lasith Malinga said on Sunday that his World Cup career is over. “I hope to be of service to my team as long as I can, but I won’t be able to play in the next World Cup in 2015. I have been carrying injuries for the past few weeks and with little rest,” Malinga, 27, told state-run television.

The seamer with the distinctive slingshot style did not elaborate on his injuries, but a career-threatening right knee injury sidelined him in 2008 and in early 2009.

“I ask the youngsters to play well in the next World Cup,” he said after the team arrived from Mumbai on Sunday after losing the World Cup final to Indiaby six wickets.

During Saturday’s final, Malinga’s trademark collection of yorkers and toe-crushers grabbed the wickets of Virender Sehwag, leg before for nought, and Sachin Tendulkar for 18, but he was unable to make further inroads into the powerful Indian batting line-up.

Malinga was the most successful Sri Lankan bowler on Saturday, ending the game with two wickets for 42 runs and 13 wickets for the tournament.

“I did what the team expected me to do,” said the seamer who has taken 127 wickets during his seven-year limited overs career spanning 84 games.

“I couldn’t bowl yorkers properly because the ball was too wet. It was difficult to swing the ball. I tried hard. I regret I couldn’t take more wickets.”

Malinga said he was happy to become the first bowler to claim two World Cup hat-tricks.

During the group match against Kenya, Malinga’s hat-trick victims were Tanmay Mishra, Peter Ongondo and Shem Ngoche. He next bowled Elijah Otieno to complete a four-wicket burst off six balls.

Against South Africa in the Caribbean four years ago, his hat-trick victims were Shaun Pollock,Andrew Hall and Jacques Kallis with Makhaya Ntini the fourth to fall.

Saturday’s loss was Sri Lanka’s second successive runners-up finish, having lost to Australia in 2007. They won their first and only World Cup in 1996.

2 Responses to My World Cup career is over

Home » My World Cup career is over