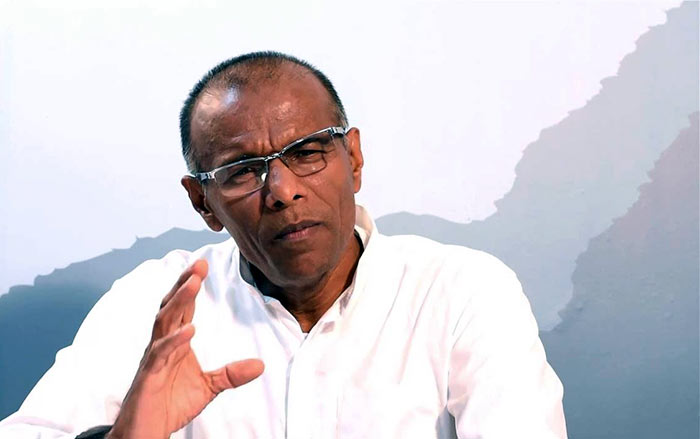 Attorney-at-law Nagananda Kodituwakku, yesterday, said that an utterly corrupt electoral process had deprived him of the opportunity to contest the Nov. 16, 2019 presidential election. Kodituwakku was the first to declare his intention to run for President. He did so in 2017.

A dejected Kodituwakku said that the Election Commission (EC), appointed by the Constitutional Council in terms of the much-touted 19th Amendment to the Constitution, too, was responsible for the pathetic situation. The EC was nothing but a toothless Tiger, Kodituwakku charged, adding that the process of registering political parties should be overhauled.

The EC is scheduled to accept nominations, today (07)

One-time head of the Customs Revenue Task Force alleged that the EC had turned a blind eye to corrupt practices, in spite of being aware that the flawed system that allowed those who ‘owned’ dormant political parties to make money at the time of elections. There were 70 registered political parties though only a handful had engaged in active politics, Kodituwakku said.

In an interview with The Island over the weekend, an irate Kodituwakku revealed how he had been denied the opportunity to seek the highest office on Okkoma Wesiyo Okkoma Rajawaru Sanvidanaya ticket, at the last moment.

Responding to a query by The Island, Kodituwakku acknowledged that he had been tricked into renouncing even his British citizenship in terms of an agreement reached with Dr. Kapila Theminimulle, the Secretary of the Okkoma Wesiyo Okkoma Rajawaru Sanvidanaya. Kodituwakku said that as he really believed in the assurance received from Theminimulle, he had given up his British citizenship.

Other conditions included transfer of all funds collected by Kodituwakku to the account of Okkoma Wesiyo Okkoma Rajawaru Sanvidanaya, to handle all future sponsorships, in case Kodituwakku failed to obtain proper proof of renunciation of UK citizenship, he should unconditionally support candidate fielded by the party, funds raised by Kodituwakku to be made available to for the other candidate and finally whoever contested he wouldn’t have the leadership of the party.

Asked whether he had received an official document from the British government to prove he was no longer a British subject, Koditiwakku said that he had shown the certificate to Theminimulle.

Asked why he had sought to contest from somebody else’s party when he could have registered a party of his own, Kodituwakku said it had been his original plan. However, the EC had ruled out that possibility as registration was given only if a particular political party engaged in political for a period of four years. “As I launched my campaign in 2017, the EC couldn’t accept my request. I’m unable to register a political party till 2021,” Kodituwakku said. “EC Chairman Deshapriya suggested that I contest under a political party already registered; hence my decision to initiate talks with dormant political parties.”

There had been several rounds of talks with Dr. Theminimulle before the latter, on behalf of Okkoma Wesiyo Okkoma Rajawaru Sanvidanaya, issued a letter dated Sept 19, 2019 confirming Kodituwakku’s nomination. The Island received copies of Dr. Thaminimulla’s letter as well as the Declaration of Renunciation dated Sept. 20, 2019 issued by the UK Visas and Emigration.

Kodituwakku revealed that he had met Dr. Theminimulle, in Kandy, last Thursday (3).

Kodituwakku said, “Following talks, he agreed to visit my home at Subadrama Road, Nugegoda the following day to finalize the process. Having promised to be at my place by 10 am, Dr. Thaminimulla didn’t turn up until after 4 pm. We couldn’t go ahead as planned as he went back on his word.”

Responding to another query, Kodituwakku claimed that Dr. Theminimulle had advised him to throw his weight behind National People’s Movement (NPM) presidential candidate former Army Commander Gen. Mahesh Senanayake. Kodituwakku emphasised that he had not given up the much valued British citizenship and fought a tireless battle since 2017 to endorse the candidature of another person.

Kodituwakku alleged that a section of the civil society had sabotaged his effort to take on the system.

A bitterly disappointed Kodituwakku said that the EC should have inquired into dormant political parties, in addition to taking tangible measures to ensure a genuine candidate like him received the opportunity to contest.

Kodituwakku alleged that some sections of the civil society, too, were corrupt to the core. “They are also part of the system. Those who abuse public trust, taxpayers money or benefit from tax concessions offered to selected professions are not genuine.”

Kodituwakku said that the EC owed an explanation as to why proper action wasn’t taken in that regard. “What is the point in removing posters and banners displayed by candidates and their parties when unbelievable corrupt practices occurred under the very nose of the EC.”

The EC should be ashamed of its pathetic failure to ensure transparency and accountability in the process, Kodituwakku said. Having foreign election monitors was a joke when registered political parties made money out of a lopsided system.

Kodituwakku said that the parliament should inquire into the entire system.

When The Island raised the controversial issue of dormant political parties being bought over by major political alliances at a media conference given by all three members of the EC last Friday, Mahinda Deshapriya said that inquiries could be made if complaints were received.