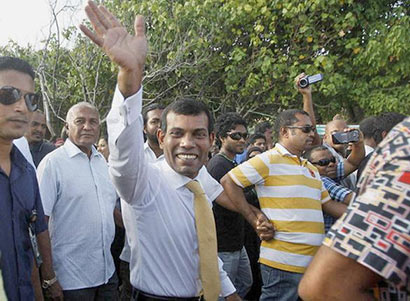 Thanks to India’s intervention, the crisis in the Maldives has blown over with the former President, Mohamed Nasheed, emerging out of the Indian High Commission in Male on Saturday. Fearing arrest, he had sought refuge at the High Commission office on February 13.

The former President came out of his temporary home, the office of the first secretary at the High Commission, at 4.15 p.m., and walked on to the streets to a wild welcome by his party men. Though details of the ‘deal’ are yet to be announced, the Maldivian Democratic Party cadre did not seem to care. For them, their ‘Anni’ had come out a bigger leader from the crisis; the Maldivian government led by Mohamed Waheed Hasan had suffered a setback, and that from now they would work harder till the September presidential elections.

“India has maintained broad-based contacts with all political parties and democratic institutions in the Maldives without interfering in its internal affairs. The Government of India urges all parties to maintain peace and calm and hopes to continue its positive engagement in the spirit of the close and friendly relations between the two countries,” it added.

Mr. Nasheed went over to Athireege-aage (new house of Athireege), the heritage building in which the Indian High Commission is located in Male, fearing arrest over his non-appearance in a local court. The case related to his having “detained” a judge when he was President. He stayed put at the High Commission, and the court issued at least three warrants to arrest him. The Maldivian government insisted that it would not interfere with a court process. As the stand-off continued, India flew down to Male a team led by MEA Joint Secretary Harsh Vardhan Shringla to negotiate a way out.

An official in the know of things told The Hindu that it required a lot of patience, synchronisation of efforts of multiple actors, and working with a few select interlocutors to pull off the deal. During the period, External Affairs Minister Salman Kurshid spoke to his Maldivian counterpart thrice, which, put together, lasted a few hours. “We had a very small window. We made it clear at every turn that our interest was only in a free, fair, credible and inclusive election,” the official said.

India had converted the crisis created by Mr. Nasheed walking into the High Commission into an opportunity, the official added. India, the MEA, and the Indian Mission in Male were criticised for their handling of the events, but the team decided not to engage public opinion for the moment. They had a job on hand, and the team had the confidence of the highest authorities in India. Some of the decisions were made on the spot in Male, and later conveyed to New Delhi, when a sequence of events was drawn up and sent. New Delhi had complete faith in the team, and none of its initiatives came in for criticism.

Mr. Nasheed thanked India for the support it had extended to him. “I am hopeful I will be able to continue the political activities and social life. I believe that even on issues that we disagree on, we can reach a compromise with the Maldivian government,” he said. He was hopeful that all candidates would be free to contest the presidential elections. (Courtesy: The Hindu) 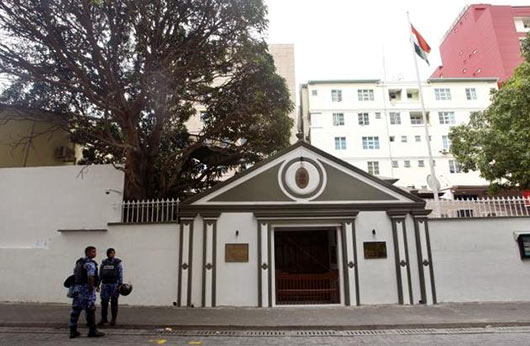