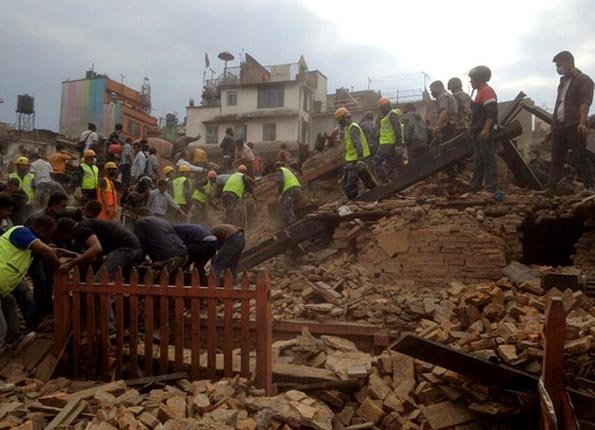 Nepal urged countries to send aid to help it cope with the aftermath of a devastating earthquake that killed nearly 1,400 people, a toll predicted to rise as rescuers used their hands to dig for survivors among the rubble on Sunday.

Thousands of people braved freezing temperatures and patchy rain to sleep on pavements, in parks or in fields in the crowded Kathmandu valley, too afraid to return to homes damaged by a 7.9 magnitude quake which struck at midday on Saturday.

“We have launched a massive rescue and rehabilitation action plan and lots needs to be done,” said Information and Broadcasting Minister Minendra Rijal.

“Our country is in a moment of crisis and we will require tremendous support and aid,” he told Indian television.

Police said the death toll had reached 1,394, with about 4,700 injured. More than 630 people had been killed in the Kathmandu valley and at least 300 more in the capital.

Foreign climbers and their Nepalese guides around Mount Everest were caught by the tremors and a huge avalanche. Some took to social media to send desperate messages for assistance, warning that otherwise more people would die.

Hospitals across the impoverished nation of 28 million people struggled to cope with the dead and injured from Nepal’s worst quake in 81 years, and a lack of equipment meant rescuers could look no deeper than surface rubble for signs of life.

Kathmandu’s Bir Hospital had so far received 300 to 350 patients with serious injuries, and most of them died, said paramedic Dinesh Chaudhary. He said the hospital was running out of supplies and were procuring medicines from shops outside.

“There will be many more patients coming in tomorrow because only a very small part of the debris has been cleared,” he said.

Ramesh Pokharel, a staff member of the Bhaktapur Hospital on the outskirts of Kathmandu, said that around 50 bodies were lying in a field outside.

Doctors were treating patients in a tent next to Bhaktapur hospital’s main building, and staff were too busy to count or register names of the casualties.

The earthquake, centered 50 miles (80 km) east of the second city, Pokhara, was all the more destructive for being shallow.

Areas of Kathmandu were reduced to rubble, and rescue operations had still not begun in some remote areas.

Among the capital’s landmarks destroyed in the earthquake was the 60-metre-high (100-foot) Dharahara Tower, built in 1832 for the queen of Nepal, with a viewing balcony that had been open to visitors for the last 10 years.

A jagged stump 10 meters high was all that was left of the lighthouse-like structure. As bodies were pulled from the ruins, a policeman said up to 200 people had been trapped inside.

Across the city of roughly 1 million people, rescuers scrabbled through destroyed buildings, among them ancient, wooden Hindu temples.

“I can see three bodies of monks trapped in the debris of a collapsed building near a monastery,” Indian tourist Devyani Pant told Reuters. “We are trying to pull the bodies out and look for anyone who is trapped.”

Neighboring India, where 44 people were reported killed in the quake and its aftershocks, was first to respond to calls for help, sending military aircraft with medical equipment and relief teams.

The Indian embassy in Nepal said 285 members of the National Disaster Response Force had been sent to assist the Nepalese army in the rescue effort.

Aid groups readied staff to go to Nepal with supplies to provide clean water, sanitation and emergency food, while the United States, Britain and Pakistan were among countries providing search-and-rescue experts.

TRAGEDY IN THE MOUNTAINS

An Indian army mountaineering team found 18 bodies on Mount Everest, where an avalanche unleashed by the earthquake swept through base camp. More than 1,000 climbers had gathered there at the start of the climbing season.

A tourism official, Mohan Krishna Sapkota, said it was “hard to even assess what the death toll and the extent of damage” around Everest could be.

“The trekkers are scattered all around the base camp and some had even trekked further up. It is almost impossible to get in touch with anyone.”

Around 300,000 foreign tourists were estimated to be in various parts of Nepal for the spring trekking and climbing season in the Himalayas, and officials were overwhelmed by calls from concerned friends and relatives.

Romanian climber Alex Gavan tweeted that there had been a “huge earthquake then huge avalanche” at Everest base camp, forcing him to run for his life.

In a later tweet he made a desperate appeal for a helicopter to fly in and evacuate climbers who had been hurt: “Many dead. Much more badly injured. More to die if not heli asap.”

In the Annapurna mountain range, where scores were killed in the nation’s worst trekking accident last year, many hikers were stranded after the earthquake, according to messages on social media, but no fatalities have been reported.

Stan Adhikari, who runs the Mountain House lodge in Pokhara near the mountain range, said the city had not seen much damage. He said he was hoping roads to Kathmandu would be accessible on Sunday morning.

Nepal, sandwiched between India and China, has had its share of natural disasters. Its worst earthquake in 1934 killed more than 8,500 people. 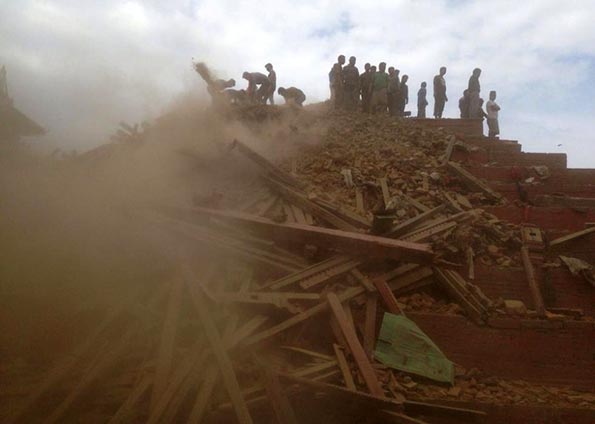 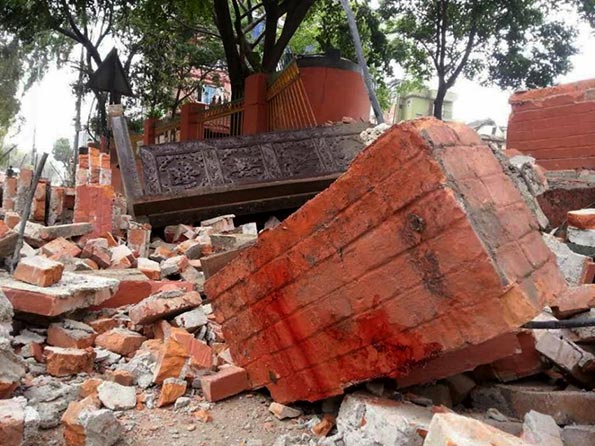 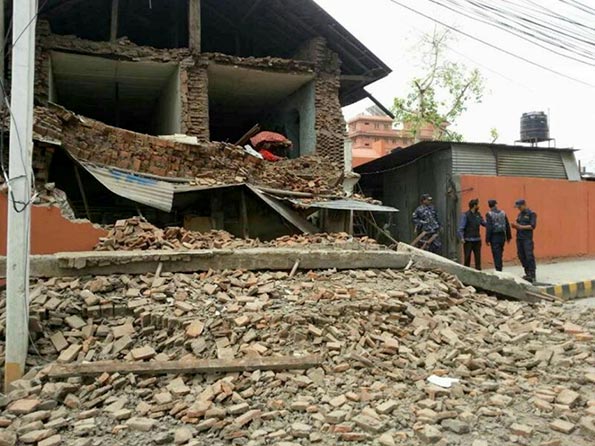