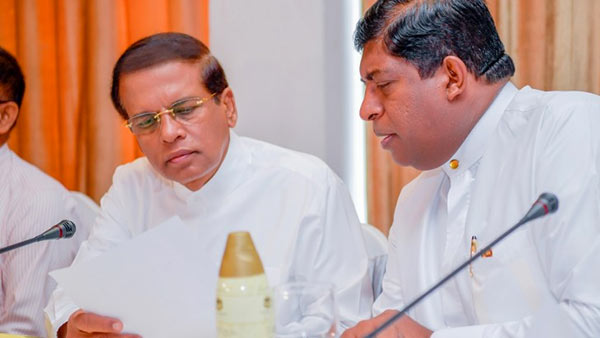 President Maithripala Sirisena yesterday, said he would hold a meeting with all stakeholders to discuss the concerns raised on the new Inland Revenue Act , after the Sinhalese and Tamil New Year.

The President of the Inland Revenue Commissioners Association, Mahinda Gunaweera addressing the 16th Annual Meeting at Kingsbury, explained that the Revenue Administration and Management Information System (RAMSIS) system was programmed and based on the current Inland Revenue Act and any changes to the Act would make RAMSIS redundant.

RAMSIS was introduced in 2012 with the facilitation of the ADB to have the Singaporean Government assist the automation of the Department of Inland Revenue with the ultimate objective of “integrating the automated systems of the Inland Revenue Department, Sri Lanka Customs and Ministry of Planning to optimize revenue and fiscal efficiency and accountability”. Furthermore RAMSIS would also connect with 26 other government agencies in order to make it easier for tax payers to pay their taxes online and for the IRD to monitor and track tax payments. Services such as registration, returns, tax payments, appeals, collections, cancellation, directions, and clearances would go through the system which could collect over 95 percent of the total tax revenue.

The last and second phase of RAMSIS is expected to be completed by October of this year.

“We are now reaping the benefits of RAMSIS. We have managed to increase revenue collection of the Economic Service Charge by 16 percent, VAT by 187 percent, NBT by 157 percent and the personal and company income tax by 113 percent”, explained Gunaweera and added that to replace RAMSIS at this point would be a colossal waste of money and effort.

“It will cause many unforeseen consequences, inconvenience the people and confuse tax administration”, he said. The Association instead has proposed that the current Inland Revenue Act No 10 of 2006 instead be reviewed and any unnecessary tax incentives be removed in order to increase the county’s tax base.

“We cannot make the structural changes the IMF needs. With revisions to the existing act, we can increase our base”, he said.

The government however has been put under pressure by the IMF to introduce a new Inland Revenue Act; the revision of its tax policy is one of conditions put forward by the IMF when it granted the USD 1.5 billion Extended Loan Facility to Sri Lanka in 2016. The IMF was of the opinion that, “new Act should: broaden the tax base by removing excess tax incentives; modernize rules related to cross-border transactions to address base erosion and combat tax avoidance; reduce complexity through an improved principles-based drafting style; and strengthen and clarify existing powers of the Inland Revenue Department to improve enforcement”.