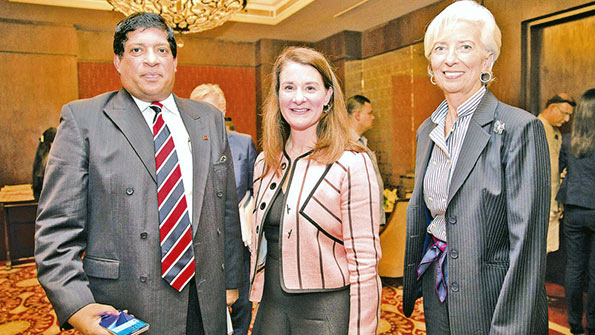 Speaking at the ‘Advancing Asia’ an economic conference in New Delhi hosted by the International Monetary Fund and India he said that though some of the leftist political parties were objecting to this they will go ahead with this as it would offer ample credit for rural areas at lower interest.

“Laws are being formulated to cover foreign financing to enter micro-lending,” he said.

Over the past five years, private lenders have also started to directly borrow from state-backed development lenders in Europe to on-lend domestically.

Though consolidation into larger entities which were more stable would make the system safer for depositors, large banks sometimes did not have the focus to lend to micro-borrowers, he said.

Mahendran was speaking at Advancing Asia: investing for the Future ‘Advancing Asia’ an economic conference in Delhi hosted by the International Monetary Fund and India at the Taj Palace Hotel, New Delhi.

Sri Lanka was still allowing smaller non-bank lenders to raise deposits, while countries like Thailand had banned the practice he said. In Sri Lanka so-called finance companies, give higher rates for depositors but also lend to more risky or ‘sub-prime’ customers. They get into trouble mostly due to real estate finance, when bubbles fired by the central bank collapse.

Sri Lanka’s finance ministry has a three decade history of borrowing dollars from multilateral agencies and on-lending in domestic currency to banks to finance small and medium enterprises (SMEs) as well as micro lending.

The Central Bank itself had a program at one time for ‘landless farmers’ where a revolving credit fund, backed with foreign finance was used in a micro-finance scheme. Governor Mahendran said rural entrepreneurs must have access to more credit and requested local banks to open more rural branches. Christine Lagarde, Managing Director, International Monetary Fund speaking at the event said that the increased interconnectedness means that Asia now affects the world more than ever before; by the same token, Asia is now more deeply affected by global economic developments than ever before and must respond to them.

“This region’s dynamism presents a historic opportunity to invest now in the future and to advance Asia. Doing so will not only put Asia on the path to sustained growth, but also strengthen its role in the global economy as a key contributor and as a leader for the 21st Century.”