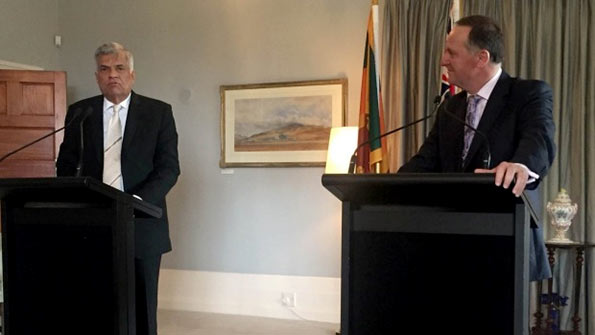 “Prime Minister Wickremsinghe’s visit to New Zealand follows my visit to Sri Lanka in February and shows the commitment of both our governments to strengthen the relationship between our two countries.

“Sri Lanka has embarked on a courageous course to rebuild the country after a generation-long civil war, and we are keen to support that process both politically and by growing our strong economic relationship.

“Establishing High Commissions in Wellington and Colombo in the next few years will help support that process.”

Mr Key and Prime Minister Wickremesinghe discussed a wide range of issues including two-way trade and investment, dairy cooperation and peace and security.

Mr Key also welcomed the progress that Sri Lanka has made in recent months on reducing tariffs on New Zealand dairy products.

Prime Minister Wickremesinghe is in New Zealand from September 30 –
October 3. He is travelling with several Ministers and a business delegation.