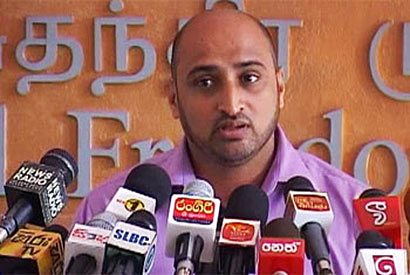 The National Freedom Front (NFF) has accused the Leader of the Democratic Party (DP) Sarath Fonseka of being a crony of imperialistic Western powers whose sole intention is to subdue Sri Lanka.

During a recent gathering, the Leader of the DP Sarath Fonseka had asserted that Sri Lanka should seek the assistance of the United Nations (UN), in order to depose the current draconian regime which has inflicted suffering and tyranny on its citizens as had many Middle-Eastern countries during the recent past.

Media Spokesperson of the NFF Mohammed Muzammil told Ceylon Today, the statement made by Sarath Fonseka could not be taken superficially as it bears similar semblance to his treacherous statement about the ‘white flag’ incident.

“Sarath Fonseka, who covertly assisted Western Imperialistic powers in the past, is now doing it out in the open. As mentioned by Fonseka, we would like to ask of him to show us one example where a country has benefitted from UN intervention. All the countries which sought UN, American or British assistance, are war ravaged nations. Look at Libya, Afghanistan, and Iraq. Have they prospered? What relief have they obtained? Didn’t the UN separate Sudan? What Sarath Fonseka desires is to provide Sri Lankan citizens as bait for the UN’s Human Rights and Separatist bombs instead of the LTTE’s suicide bombs” Muzammil said.