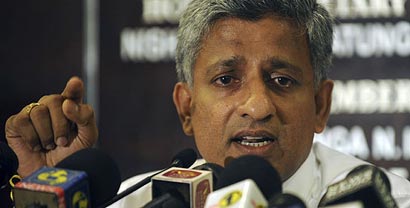 It is indeed tragic that Sri Lanka Cricket has got into the financial imbroglio that it is faced today. It has caught global attention by it, even prompting the South African Test and ODI team players, to say that they wished their Lankan opponents were paid their earnings prior to the start of the tour! That was the solidarity and sympathy to the Sri Lankans, and a team they respected.

There is a huge simmering crisis within Sri Lanka Cricket with players and officials not being paid. No one seems to know in which direction Sri Lanka Cricket is heading! Thumping overdrafts to be settled. But, the crux of the matter is, where did it all start?

It all started at the time that Upali Dharmdasa headed SLC in the late 1990s, the last time where he left with a thumping Rs. 750 million to the credit of the Board. No one would be interested in the manner in which it was spent.

Then came the World Cup in the subcontinent and Sri Lanka was one of the co- hosts. This is where the then Interim Committee got all their fundamentals wrong. They developed venues unnecessarily. It is also from reliable sources that it transpired that the directives for the development of the Hambantota Cricket Stadium was at the insistence of President Mahinda Rajapaksa for political reasons and also as an ego- chuckling exercise.

One does not need a huge Finance Department or high profile Accountants within SLC, if they could not have advised the Interim Committee of what the financial liabilities were, ahead of the grandiose plans of developing stadia for the World Cup. If one has a surplus of cash, one does not need accountants but what you need is a good book keeper to maintain the financial statements.

There had been almost boundless profligacy on the part of the Sri Lanka Cricket where thumping salaries had been paid to Accountants and other senior officials of SLC, but the very core on which the entire institution hinges on- the national players were concerned, they have been overlooked! The finance related professionals have obviously not advised the Interim Committee of the draw backs in the finances which had aggravated the wound to what it is today. Thus, the creation of a brand new ground at Hambantota, which is a white elephant today. They further developed the Khetttarama Stadium also at a huge cost.

But the creation of the Pallekelle ground was justified as Kandy needed one given that it is the gateway to the rest of Sri Lanka and given the stupendous contributions that cricketers- Muttiah Muralithern and Kumar Sangakkara have made over the years to national cricket plus its picturesque setting could be promoted for sports tourism.

Granted that the Interim Committee would have succumbed to the pressures of the higher authorities but they could also at the same time, have well advised the powers that be of the consequences of having such investments, even whether the returns were minimal.

Some of the previous Interim Committee members could be of the opinion that the investments for the cricket stadia would have been justified, but in that case as well, the response would be no, with the performances of the national cricket team also going down as well.

There is also the hoary Sinhala idiom which says: ” Don’t start grinding the condiments and chillies for the curry, for fish which are yet in the sea!! (muhude inna maaluwanta demmama miris ambaranna epa!!) and that was what exactly happened.

Nishantha – the bane in a future SLC

True that the fresh elections would be held early next year but what is also appalling is that former SLC Secretary Nishantha Ranatunga is also rumoured to wish to contest the elections! This would tantamount to be an outright joke! He was one of the people of the previous Interim Committees who plunged the entire institution to the brink of bankruptcy. Ranatunga has made a statement to the media justifying the investments in the stadia.

It is also impossible to think that Upali Dhamadasa’s Committee or Thilanga Sumathipala’s Committee just in case the latter decides to contest, would accommodate Ranatunga. It is also a known fact that other stakeholders in the process would find it impossible to work alongside Ranatunga, who is believed and widely known to dominate people and proceedings at all given times. So, the new Committee has to be extremely cautious with regard to Ranatunga.

Ranatunga should be held responsible for all that was happening within Sri Lanka Cricket at that time. Some people say that he was ignorant. But if that was so, Ranatunga should not have been seated there!

There were lots of fingers pointed at former Chairman D.S. De Silva, with his nephew Suraj Dandeniya leading him up the gum tree. Was Nishantha Ranatunga doing the right thing when he made 46 trips overseas? There was also a permanent cash float of Rs. 1 million which was kept for him for his overseas trips which he decided to travel overnight at the drop of a hat.

There were huge over runs on staff salaries. The two Dandeniya brothers especially well over the six figure marks in salaries (Rs. 450,000 and Rs. 600,000), for what earthly purposes, one would not know! These matters that put SLC in jeopardy with no final salvation.

The questions that will remain unanswered will be how the cricketers will be paid even when the ICC Funds arrive in the light of the thumping bank overdrafts which have to be settled. There is also a school of thought that the ICC will pay the players up front and the remainder would be remitted to SLC.

Granted that it will be an astute businessman who will have to take the mantle over Sri Lanka Cricket. But the heart of the matter is that none of the previous members of the interim committee should be taken into the new committee which will get elected in January 2012. If that happens, they will earn the wrath of the entire media who will be after them.

If Upali Dharmadasa’s team comes forward, they will be engaged in a money saving exercise. But, if by some chance, Nishantha Ranatunga becomes Secretary, then it will be his golden rendezvous overseas!

What no one has taken into account is a reality which is virtually invisible at face level and what meets the eye. No stakeholder factored in, the players’, over the nonpayment of their dues. They are contracted players, after all. May be that affected their performances, at least psychologically, against England, Australia and Pakistan. They will be playing for the country out of zeal and conscientious concern. But who will like to play or serve the country without being paid for six months? That will also be worrying them to death in the light of their commitments and they cannot afford to have a clear mindset in their performances.

It is also moot to see how the new committee will bow or not bow to political pressures. Kumar Sangakkara resigned the national Test and ODI captaincy in the immediate aftermath of the lost 2011 Mumbai World Cup. Selectors led by Aravinda De Silva also followed suit, which had been attributable to political pressures, although all of them would be tightlipped on that score. Some of the best performances of Sri Lankan cricket had been at times where there were no political pressures at all.