No factions in this Party – Sajith 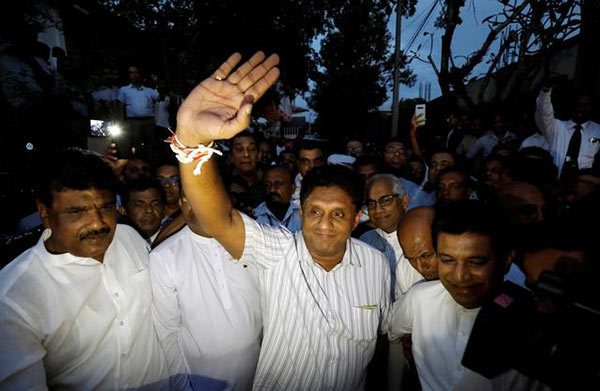 The alliance supporting Sajith Premadasa stretches across the religious, ethnic and ideological spectrum, encompassing Buddhists, Tamils, Muslims and Christians. The nomination is expected to be endorsed by the alliance partners in the United National Front, including the Sri Lanka Muslim Congress (SLMC), All Ceylon Makkal Congress (ACMC), the Tamil Progressive Alliance (TPA) and Jathika Hela Urumaya (JHU).

The nomination followed the most intense debate in the living memory of the party, with different segments of the UNP openly vying for a number of contenders. After an at-times high-pitched and very public debate on how best to unite the various constituencies of the UNP and its alliance partners under a common banner, Premadasa won support across the party’s ranks, enabling Party Leader Ranil Wickremesinghe to propose his candidacy unconditionally.

For weeks, speculation was rampant on whether the party would line up behind Premadasa, party leader Wickremesinghe, or Speaker Karu Jayasuriya to face the electorate. Last week, Jayasuriya declared that he would not seek the nomination, and thereafter hosted several discussions with Wickremesinghe and Premadasa that were key to bringing the UNP together behind its deputy leader.

Speaking to Daily News about the decision and his plan to bring together all factions of the party going forward, Premadasa said “in this party there are no factions – there are only UNP people. We all have crucial roles to play in protecting freedom in our country. Make no mistake. This is a battle between fear and freedom. I join hands with my sisters and brothers in the UNF to invite all those forces who stand for freedom against fear to join us, walk with us and lead our country away from the darkness of the past and into an era of freedom and prosperity.”

At age 52, Premadasa is the youngest presidential candidate since 1994, when the UNP nominated the late Gamini Dissanayake, who was slain by the LTTE weeks before the November 9, 1994 presidential election. Premadasa is also the first son of a president to be nominated to the nation’s highest office. His father, President Ranasinghe Premadasa, was elected on killed on May Day, 1993, also by the LTTE. The older Premadasa was the last president to have been elected from the UNP.

Sajith Premadasa was 10 years old when his father was appointed Prime Minister in 1977, a position he held for 11 years until he became president in 1988. When Sajith joined the UNP in 1994, he declined to accept the safe Colombo area organizer post that was offered to him, instead asking to be made UNP organizer for Tissamaharama in the Hambantota district, a staunch Sri Lanka Freedom Party (SLFP) stronghold.

He has been elected to Parliament as a UNP MP from the Hambantota district in every general election since held, in 2000, 2001, 2004, 2010 and 2015, with the highest number of preferential votes in the district. Initially in Hambantota, and later around the country, Premadasa has followed in his father’s footsteps, spearheading a number of poverty alleviation programs targeting Sri Lanka’s most vulnerable demographic.

The younger Premadasa is expected to face off against Sri Lanka Podujana Peramuna (SLPP) presidential hopeful Gotabaya Rajapaksa, who was nominated by the Rajapaksa-led party on August 11.

2 Responses to No factions in this Party – Sajith

Home » No factions in this Party – Sajith