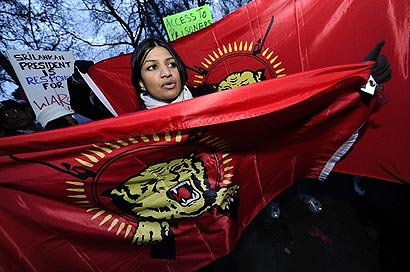 Tamil campaigners were stopped from serving a war crimes arrest warrant on a Sri Lankan general by his premature departure from Britain. An application was lodged at Horseferry Road magistrates court, central London, but inquiries by Scotland Yard established that he had left on Thursday night. Tamil groups blame the president, Mahinda Rajapaksa, and his senior officers for the deaths of 40,000 civilians in the final stages of the civil war last year. The Oxford Union withdrew an invitation for Rajapaksa to speak this week citing threats of mass protests.