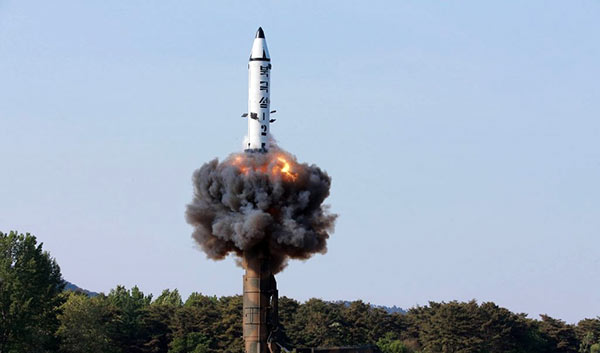 The missile has technical capabilities far superior to the previous Hwasong-14 and landed in its targeted area, flying 950 kilometers (590 miles), the newsreader said.

North Korea issued a direct challenge to President Donald Trump with the launch of an intercontinental ballistic missile (ICBM) that Defense Secretary James Mattis said demonstrates it has the ability to hit “everywhere in the world.”
Pyongyang launched a Hwasong-14 missile in the early hours of Wednesday morning local time that flew higher, and demonstrated a longer range, than any of its previous tests.

It was the first missile fired in almost two months, and came despite Trump’s repeated warnings, delivered again during this trip to South Korea earlier this month in a direct message to North Korea: “do not try us.”

The missile launched Wednesday spent around 53 minutes in the air, reaching a height of up to 4,500 kilometers (2,800 miles), before splashing down in waters around 210 kilometers (130 miles) west of Japan’s Aomori prefecture, according to authorities in Japan and South Korea.

Hours after the launch, Trump sounded more restrained, telling reporters Tuesday at the White House that the US “will handle” the situation. “We will take care of it,” the President said, adding later that North Korea ”is a situation that we will handle.”

Mattis, who was with Trump in the Roosevelt Room of the White House, outlined how much tougher that situation has become. The test missile, he said, went “higher, frankly, than any previous shot they have taken” and demonstrates that North Korean leader Kim Jong Un now has the ability to hit “everywhere in the world basically.”

“The bottom line is, it’s a continued effort to build a threat — a ballistic missile threat that endangers world peace, regional peace and certainly the United States,” Mattis concluded.

Secretary of State Rex Tillerson strongly condemned the launch and called for redoubled international pressure on Pyongyang, saying that the US “remains committed to finding a peaceful path to denuclearization.” But he added a lightly veiled warning about limited US patience.

“Diplomatic options remain viable and open, for now,” Tillerson said.
Sen. Lindsey Graham, a South Carolina Republican who sits on the Armed Services Committee, told CNN’s Wolf Blitzer that, “If we have to go to war to stop this, we will. If there’s a war with North Korea it will be because North Korea brought it on itself, and we’re headed to a war if things don’t change.”

On Wednesday, a North Korea official reiterated comments made to CNN in October that there would be no diplomacy until the country has proven its nuclear capabilities.

The official added the two steps needed to achieve this goal were the “testing of a long-range ICBM (intercontinental ballistic missile)” capable of reaching the US, followed by an above-ground nuclear detonation.

“Before we can engage in diplomacy with the Trump administration, we want to send a clear message that the DPRK has a reliable defensive and offensive capability to counter any aggression from the United States,” the official said, referring to the Democratic People’s Republic of Korea.

Prior to today’s launch, lawmakers on both sides of the aisle had warned of devastating consequences if the US takes military action against North Korea. Pyongyang can batter Seoul with a barrage of conventional weapons, putting millions of South Koreans and more than 28,000 US troops stationed there within easy target range.

Japanese Prime Minister Shinzo Abe, speaking from Tokyo, issued a warning of his own. The latest missile launch, he said, “significantly undermines the strong determination of the international community’s peaceful resolution of the issue.”

International diplomacy swiftly kicked into high gear, with US Ambassador to the UN Nikki Haley requesting an emergency meeting of the UN Security Council with her counterparts from South Korea and Japan. That meeting is set to take place Wednesday afternoon.

Meanwhile, Tillerson announced that the US and Canada will convene a meeting of nations that contribute military forces to the UN Command that supports South Korea to discuss “how the global community can counter North Korea’s threat to international peace.”

For decades, multiple US administrations and international coalitions have tried and failed to curb Pyongyang’s nuclear program, whether they’ve used carrots or sticks. Sometimes, North Korea has taken the carrots — aid and greater access to the international system — and still continued its program.

Sanctions, the latest round of which the US announced on November 22, seem to have made little difference in curbing North Korea’s resolve to obtain nuclear weapons and the means to deliver them.

Pentagon spokesman Col. Rob Manning told reporters Tuesday that the missile was “launched from Sain Ni, North Korea, and traveled about 1,000 kilometers before splashing down in the Sea of Japan, within Japan’s Economic Exclusion Zone.”
“The North American Aerospace Defense Command (NORAD) determined the missile launch from North Korea did not pose a threat to North America, our territories or our allies,” Manning added.

Even so, David Wright of the Union of Concerned Scientists said that if the missile hadn’t been lofted into the sky and had flown on a standard trajectory, it would have been capable of traveling 13,000 kilometers, or 8,100 miles.

“Such a missile would have more than enough range to reach Washington, DC, and in fact any part of the continental United States,” Wright said in a statement, though he noted that range probably wouldn’t be possible if the missile were fitted with a heavy nuclear warhead.

Still, Hawaii emergency management officials and Gov. David Ige have discussed the first test of an “attack warning” siren since the Cold War in light of the threat of possible nuclear attack. Monthly tests will begin Friday.

Guam’s Homeland Security/Office of Civil Defense posted on Facebook that it had been notified that North Korea “conducted a ballistic missile launch” but said there was no immediate threat to Guam or the Marianas.

But the Center for International and Strategic Studies, which closely monitors North Korean launches through its Beyond Parallel initiative, said historical data shows that Pyongyang is set to significantly ratchet up its testing in the first half of 2018.

South Korea demonstrated some of its efforts to prepare for North Korean hostilities on Tuesday. The country’s Joint Chiefs of Staff said the South Korean military had carried out a “precision missile strike drill” just minutes after North Korea’s launch.

The precision missile strike matched the flight distance of the North Korean missile and landed in waters off the east coast of South Korea.

The point, Mattis told reporters in Washington, was “to make certain North Korea understands that they could be taken under fire by our ally.”

“It is a measured and pointed response but also a reminder that the peninsula remains on hair-trigger alert,” he told CNN. “In this situation, provocations or even mistakes could quickly escalate out of control.”

White House press secretary Sarah Sanders said on Twitter that Trump “was briefed, while missile was still in the air, on the situation in North Korea.”
The missile was launched from the west part of North Korea and is likely to have landed in Japan’s Exclusive Economic Zone after flying for about 50 minutes, according to Masaki Hikida, public relations officer at Japan’s Ministry of Defense.

A 50-minute flight time would suggest that this was a major ICBM test “possibly in operational settings” and should “disabuse US officials from thinking military displays, sanctions, or threats are deterring North Korean tests,” according to Mount.

“Today’s test proves that Pyongyang still feels able to test at will,” he told CNN, adding it also shows the Trump administration “has to get serious about deterring an atmospheric nuclear test.”

North Korean Foreign Minister Ri Yong Ho had hinted in September that Pyongyang could carry out an atmospheric nuclear test over the Pacific Ocean, possibly by strapping a warhead atop a missile or dropping it from an airplane.

US defense and intelligence officials had been growing increasingly puzzled as to why Kim had not tested a ballistic missile since September.

North Korea has launched missiles at an unprecedented rate in 2017, testing two in July that also demonstrated intercontinental range.

Before Wednesday’s test, North Korea had fired 22 missiles without active warheadsduring 15 tests since February. US officials say North Korea is continuing to develop its missiles, rocket fuel and engines, as well as targeting and guidance systems.

The US believes Pyongyang may be able to put a miniaturized warhead on a missile sometime in 2018 — giving it the theoretical capability to launch a missile with a warhead atop it that could reach the US.

It is currently testing a more advanced version of its existing ICBM, a US official told CNN earlier this month.