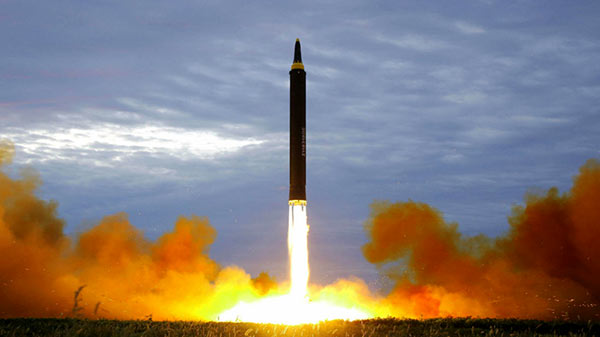 North Korea has fired a ballistic missile across Japan, its second such provocative move in weeks.

South Korea’s military said the missile reached an estimated altitude of about 770km (478 miles) and travelled 3,700km before landing in the sea off Hokkaido.

“If North Korea continues to walk down this path, it has no bright future,” he said in a statement.

He put the burden of response on China and Russia, nuclear-armed North Korea’s main economic partners.

“China supplies North Korea with most of its oil. Russia is the largest employer of North Korean forced labour,” he said.

“China and Russia must indicate their intolerance for these reckless missile launches by taking direct actions of their own.”

President Moon Jae-in held an emergency meeting of his national security council and warned the test would mean further diplomatic and economic isolation for North Korea.

Guam ‘within range of rocket’

The South Korean military said the latest launch – the first since sanctions were tightened this week – took place from the Sunan airfield north of Pyongyang just before 07:00 local time (22:00 GMT on Thursday).

As with the last launch, it flew over Japan’s northern Hokkaido island before splashing down in the Pacific Ocean.

Sirens sounded across the region and alerts were sent out warning people to take cover.

According to the initial estimates, the missile flew considerably higher and further than the one fired on 29 August, which Pyongyang warned was only “the first step” in its military operations in the Pacific.

The US Pacific territory of Guam, which North Korea claims to have plans to fire missiles towards, is 3,400km from Pyongyang, so would be within range of the latest missile. Japan’s chief cabinet secretary Yoshihide Suga said there had been no reports of damage to aircraft or ships.

The UN Security Council will meet on Friday in New York at the request of Japan and the US.

North Korea, which insists it needs a nuclear and weapons programme to ensure its survival, has repeatedly conducted missiles launches in recent months, disregarding UN sanctions.

It also conducted its sixth nuclear test two weeks ago, which it claimed was a hydrogen bomb, the most powerful weapon ever made.

But these appear to have done nothing to stop North Korea’s weapons development, nor its fiery warnings.

On Thursday, it threatened to “sink Japan and turn America to ashes”.

North Korea has been working on its missile programme for decades, with weapons based on the Soviet-developed Scud

It has conducted short- and medium-range tests on many occasions, sometimes to mark domestic events or at times of regional tension

In recent months the pace of testing has increased; experts say North Korea appears to be making significant advances towards its goal of building a reliable long-range nuclear-capable weapon

In July, North Korea launched two missiles which it said were Inter-Continental Ballistic Missiles (ICBMs) capable of hitting the US; experts believe they put parts of the US in range

On 3 September, North Korea said it tested a hydrogen bomb that could be miniaturised and loaded on a long-range missile