One of the darkest days in Parliamentary history – Bimal 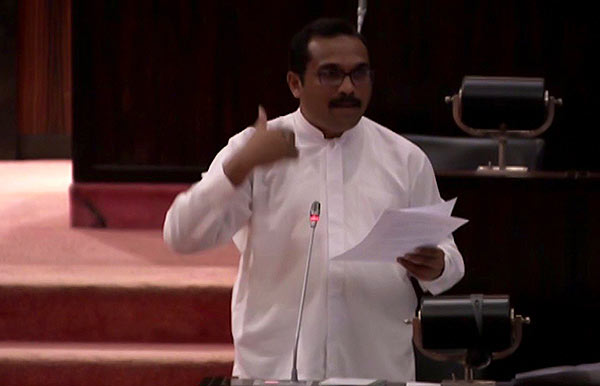 Government created history yesterday (5), albeit on a negative note – all Ministers who were supposed to provide answers for 15 Oral Questions failed to attend Sittings and as a result not a single question out of the 15 listed in the Order Paper was answered yesterday.

However, JVP MP, Bimal Ratnayake lambasted the Government and said, “This is one of the darkest days in Sri Lanka’s Parliamentary history. There is no single Minister to respond to our questions. This Parliament will sit only for a few months more.

These 15 questions listed in the Order Paper have been there for a long time, and some of them are more than a year old. Now the Government is seeking more time to provide answers. What kind of Government is this? This shows the Government’s accountability to Parliament.”

When Deputy Speaker, Ananda Kumarasiri announced the Oral Question Round, Opposition and Government MPs who had forwarded questions said they wanted answers.

However, since none of the Ministers who were supposed to provide answers were present, Leader of the House, Minister Lakshman Kiriella had to seek additional time for 12 questions. He tabled the two responses which had been sent by officials. One question was re-directed to a different Ministry by the Deputy Speaker.

JVP MP, Bimal Ratnayake, who spoke after Kiriella, said he was disgusted by the Government’s attitude when it comes to providing answers to questions raised by MPs in Parliament.

Kiriella said, he agreed with the concern raised by MPs.

“Prime Minister Ranil Wickremesinghe several times instructed Ministers to give priority to Parliament. Ministers should give him a hearing and be here to respond to queries of MPs,” he noted.

UNP MP, S.M. Marikkar: We raise these questions on behalf of our electorate. We have to answer our people. That is why we were elected to Parliament. The absence of Ministers to answer our questions is a violation of our privilege as MPs. We have raised the same concern with the Speaker and Party Leaders on several occasions. But it seems Ministers do not care.

UPFA MP, Dayasiri Jayasekera: It is the UNP Ministers who are absent. They are all in Kurunegala for a meeting. They are troubled over finding a Presidential candidate.

UNP MP Ananda Aluthgamage: MPs and Ministers in the Government do not listen to the Prime Minister.

Deputy Speaker Kumarasiri: The matter could be taken up at the party leaders’ meeting.

Home » One of the darkest days in Parliamentary history – Bimal