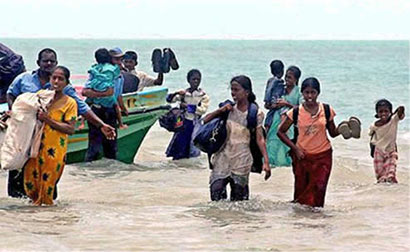 Over 100,000 Sri Lankan Tamil refugees are still in Tamil Nadu and many more are believed to be residing in the State without registering themselves with the police. The Government of India has so far spent about Rs. 667 crore for the relief of the refugees and the expenses continue in the form of cash dole, subsidised ration, clothing, utensils, medical care and educational assistance.

According to a report of the Ministry of Home Affairs, more than 3 lakh refugees entered India in different phases between 1983 and 2012 due to the ethnic conflict. While 99,469 were repatriated to Sri Lanka till 1995, some refugees left to other countries on their own.

After 1995, there was no organised repatriation, and as on February, 2014, there were 65,570 refugees in 113 camps in the State and about 34,788 refugees staying on their own outside the camps after registering with the local police, The Hindu reports.