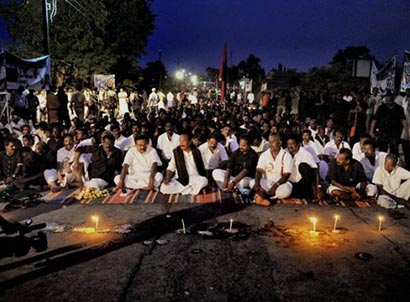 Madya Pradesh police in India said over a dozen people from Tamil Nadu, including Vaiko led MDMK workers, were taken into preventive custody from Vidisha and Salamatpur near Sanchi in Madhya Pradesh where Sri Lankan President Mahinda Rajapaksa will lay foundation stone for the Buddhist and Indic Studies University on Friday.

While seven suspects were held late on Wednesday night when they arrived at Vidisha railway station in the view of Rajapaksa’s visit, nearly half a dozen MDMK supporters were detained on Wednesday at Salamatpur near Sanchi as a precautionary measure, police further added on Thursday.

Those taken into custody at Vidisha reportedly told police that they belonged to Tiruchirapalli in Tamilnadu and had ‘mistakenly’ boarded the GT Express and alighted at Agra instead of Vidisha.

Police had on Wednesday picked up five-six persons belonging to Tamil Nadu when they failed to give satisfactory response to their presence at Salamatpur, close to Sanchi town in Raisen district, security in-charge for the visit of Rajapaksa and Inspector General (IG) Hoshangabad range, Ajay Sharma has said.

One of them identified as Durai Balkrishnan, who is suffering from hypertension was admitted to Hamidia Hospital, Bhopal for treatment, police sources added.

After questioning the supporters, police sent them back to Bhopal, the IG said, adding the security has been beefed up between Bhopal and Sanchi in view of the high-profile visit.

To ensure that no Tamil protesters reached the venue, security measures have been tightened on all the entry points to Sanchi.

Also, security agencies have asked railway authorities not to halt 11 trains anywhere between Bhopal and Vidisha on September 21 to prevent entry of those who may try to cause trouble in the programme.

MDMK general secretary Vaiko, along with his supporters, is holding a road-blockade agitation near Gadchicholi on the Maharashtra-Madhya Pradesh border since Wednesday against the scheduled visit of the Sri Lankan president.

Madhya Pradesh Chief Minister Shivraj Singh Chouhan had appealed to Vaiko to give up the protest as the programme was totally apolitical in nature and aimed at strengthening mutual ties between the Asian nations.