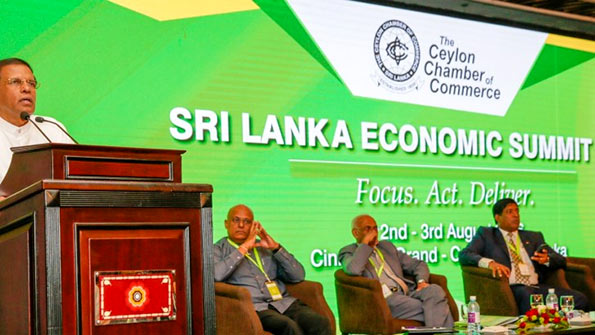 “The members of the former government are now walking on the roads by telling fairy tales. But the people are suffering due to the economic debacle caused by them”, President Maithripala Sirisena said.

The President was speaking at the inauguration ceremony of the Sri Lanka Economic Forum, held today (Aug. 02) at the Cinnamon Grand Hotel in Colombo.

The President pointed out that Sri Lanka is now suffering from a loan burden of Rs. 9000 millions. “Politicians, government officers and all people in the country should act understanding the economic debacle caused by the former government”, he said.

He pointed out that the contribution of the small and medium industries to the economy of the country is currently between 8% and 10%. “If we can increase it to 20% the national economy can be further strengthen”, the President said.

“Though there is a loan burden, the government will not cut the subsidies for the people. There must be a definite increase in the production to find money for subsidies”, he said.

The President pointed out the importance of maintaining better state financial management as well as financial discipline in a way which will not be a burden for the public. He further said that the public and private sectors should commence a new journey in collaboration with each other, in this regard.

The President said that we cannot be happy with the contribution made by the small and medium industrial sector to the economy of the country and there is a question of whether we are truly reaping the benefits of the ocean around Sri Lanka and other rich resources.

During this conference, attention had been drawn regarding taking steps without limiting to words by going beyond the issues with the aim of achieving the dream of becoming one of the best countries in the Asian region utilizing our own resources.

This economic summit organized by the Ceylon Chamber of Commerce for the 17th consecutive year under the theme of “Focus, Act, Deliver” will be held today (August 2) and tomorrow (August 3).

Finance Minister Ravi Karunanayake ,  Central Bank Governor , Dr. Indrajit Coomaraswamy, Mr. Samantha Ranatunga , Chairperson of the Ceylon Chamber of Commerce and foreign and local business community were among the participants at this event.