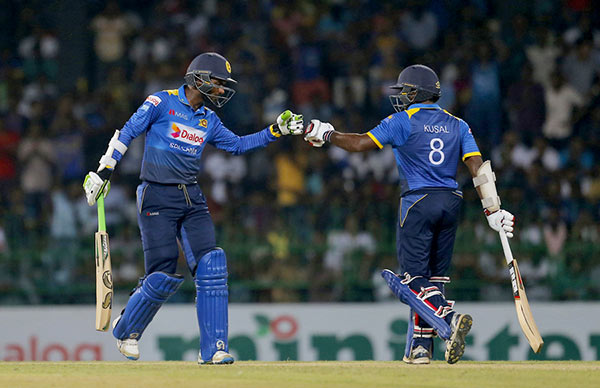 Kusal Perera struck a quick-fire half century to steer Sri Lanka to a six-wicket win over Bangladesh in the first of their two-match Twenty20 International series in Colombo on Tuesday (Apr 4).

Sri Lanka never lost their grip on the match after Perera and captain Upul Tharanga put on 65 runs in the opening stand, though a double strike by Bangladesh captain Mashrafe Mortaza slowed their progress.

Mashrafe, who announced his retirement from Twenty20 International cricket before the game, removed Tharanga for 24 and took a catch off his own bowling to dismiss Dilshan Munaweera for eight.

Perera, who smashed nine fours and a six, was out in the penultimate over hoisting a catch to Soumya Sarkar at mid-off off Taskin Ahmed but Seekkuge Prasanna (22 not out) and Thisara Perera ( four not) ended the game in the same over.

“I tried to finish the game. (I) had a couple of injuries but recovered well,” said Kusal Perera. “Every player has a couple of bad patches, (you) have to get over it, do the hard work and get out of bad patches.”

Mashrafe finished with 2-32 but other Bangladeshi bowlers struggled as Sri Lanka took a 1-0 lead in the series.

Earlier, Mosaddek Hossain top-scored with 34 not out to help Bangladesh revive the innings with a 57-run sixth wicket stand with Mahmudullah after some disciplined bowling by Sri Lanka left the visitors reeling at 82-5 at one stage.

Mahmudullah made 31 off 26 balls while Soumya chipped in with 29 in Bangladesh’s stop-start innings at R Premadasa Stadium.

Mashrafe won the toss and opted to bat first but Bangladesh were rocked by Lasith Malinga’s second ball strike.

Making a comeback in international cricket after weeks of injury lay-off, Malinga bowled opener Tamim Iqbal for a duck, though Sri Lanka could not capitalise on the wicket of the visitors’ batting mainstay .

Soumya and Sabbir Rahman put on 57 runs for the second wicket to put Bangladesh back on track before a run-out of Sabbir for 16 triggered a Bangladesh collapse and choked the visitors in the middle overs.

Soumya left in the same over before quick dismissals of Mushfiqur Rahim (11) and Shakib Al Hasan (11) threatened to derail Bangladesh completely.

“The way we batted in the first six overs was brilliant, but we lost too many wickets in the middle … we need to be more calculating while batting,” Mashrafe said after the match.

Tharanga praised Malinga for his efforts. “Malinga is one of the best bowlers in the world,” he said.

The second and final match of the series will be held at the same ground on Apr 6.