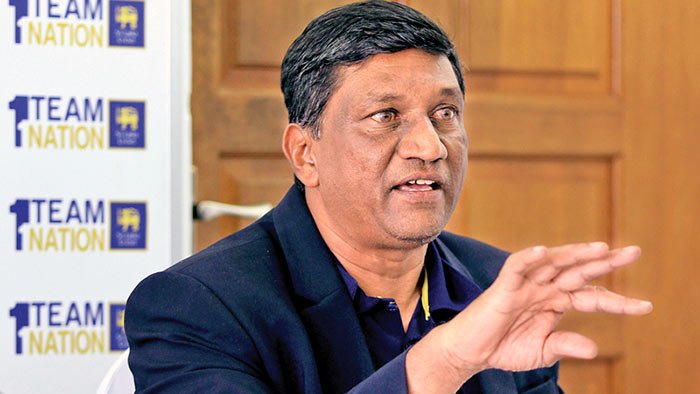 Chief selector and team manager Ashantha de Mel made a startling statement when he said that Sri Lanka players were more relaxed and performed better without a head coach.

De Mel’s stunning assessment comes following the conclusion of the Test and T20 International series against New Zealand where he was the team’s manager.

Sri Lanka drew the two-Test series one-all and lost the three-match T20I series 2-1 with a young side with all the matches being close affairs.

“My personal feeling is the main coach whether he is there or not doesn’t make much of a difference. Because of Cricket Board politics whoever is appointed as a coach has a huge amount of pressure on him. From the time he comes he is asked to produce results. Then what happens is he transfers the pressure onto the players. At the moment without a coach the pressure is not there on the players and it is easier for them to play rather than when there is a coach,” De Mel told the Daily News.

“I don’t know going forward for long term whether they need a coach or whatever. In the New Zealand series I didn’t see such a big difference of having a head coach or not. The most important thing for our players is skill coaches. The skill side is what they require in batting, bowling and fielding,” said De Mel who was manager when Chandika Hathurusingha was head coach and when Sri Lanka played without one appointing Rumesh Ratnayake as interim coach for the New Zealand series.

“If the Cricket Board can get the skill coaching side sorted out then we can go ahead. We don’t have a batting or bowling coach, the fielding coach is there but we need to get some new ideas into the fielding. It is not only the case of catching for instance when you are fielding on the boundary line you need to have the skills even if you can’t catch the ball to tip it back into the playing field. Those kinds of skills were not there when we were playing,” continued De Mel.

“Those are little skills that we have to learn not only catching. Also in the boundary line when they are fielding to make sure the twos are not given. We have to attack the ball more and get our throwing arms strengthened. Our throwing is not as good as other countries so what happens is in a 20 overs match a result can be decided by a matter of 10 runs. The first two T20I matches went down to the wire to the 20th over and very few runs made the difference. Bowling skills also they must learn the slow ball, the slow bouncer, the wide yorkers and yorkers. I don’t think our coaches are equipped to do all that,” he said.

De Mel praised the captaincy of Lasith Malinga and said that he led the side well without some of the bigger players in the team.

“Malinga seems to be getting around these young players well and he doesn’t have very many issues like he has with the bigger ones. These guys are jelling well and the team is together. They have been going out for meals together and they are behind him. That’s a good sign,” said De Mel.

“The problem is mainly with the seniors who had all kinds of camps. In this case all those seniors are not there Thisara (Perera), Angelo (Mathews) and (Dinesh) Chandimal those are the guys who had problems. If we bring these guys in we have to wait and see whether it will work out or not. We don’t know how long Malinga is going to play will he be available after the T20 World Cup, he is 36 and not young.

“We are looking at Malinga till the end of the T20 World Cup next year but it all depends on his fitness and how he goes about. If Malinga is playing he will captain, he looks good at the moment. Actually he is really fired up. I hope that he can be fit and good upto the World Cup. But we can’t rely only on one player because suddenly if he gets injured or something we have to be prepared,” he said.

Malinga rolled back the years when he produced a sensational spell of fast bowling to rout New Zealand for 88 in the third and final T20I at Pallekele by capturing five wickets for six runs that included a hat-trick and four wickets off four balls and guided Sri Lanka to a morale-boosting 37-run win.

With the World T20 next year in mind Sri Lanka fielded some youngsters for the T20I series and De Mel said that he was pleased with the performance of some of them.

“The youngsters we chose played quite well I am quite happy with their performance. Wanindu (Hasaranga) and Shehan (Jayasuriya) showed promise. The problem was that under pressure in these tight games we need to take those catches. We had a chance to win both matches if we had taken the catches,” said De Mel.

“The youngsters bring a little more exuberance into the field. There are a few more players we can look at say for instance if Angelo Mathews is fit and he can bowl he can fit into the middle at no. 5. It all depends on how he fields. We can also look at Dhananjaya de Silva as well he can do bowling and batting as well. There are another 5-6 players we can use who were not in the 15. What we were trying to do is look at the T20 World Cup then try to build up a team with some young players in and balance it,” he said.

“Spinners wise we have 4-5 for T20s, fast bowlers Lahiru Kumara and Kasun Rajitha also with Malinga and Isuru Udana maybe another two or three like Asitha Fernando or Vishwa Fernando we have a fair nucleus of bowlers. It’s just that we need to strengthen the batting middle order. We must be able to regularly get about 170 plus. We saw a bit of something good for the future in the three T20I matches. These guys will put a bit of pressure and everybody knows that you have to perform to be in the team. There are no free lunches now, its competition for everybody.”

De Mel said that he had some ideas which he intends putting forward to Sri Lanka Cricket and hopes they will implement them.

“If you are going to play under lights you’ve got to practice under the same conditions that you are going to play in a match, not during the day. This is proving to be a big deterrent especially to batsmen, bowlers and fielders. Batting under lights is more difficult than batting under sunlight and for fielders it is more difficult when the ball is in the air as it is difficult to focus,” said De Mel.

“We have to qualify for the next World T20 and we have a lot of work to do. We are planning to make a lot of suggestions to Sri Lanka Cricket and hopefully get a good response from them. If we don’t focus on our requirements we are going to be left behind by other countries who are going forward,” he said.