PM OPTIMISTIC OF THE FUTURE 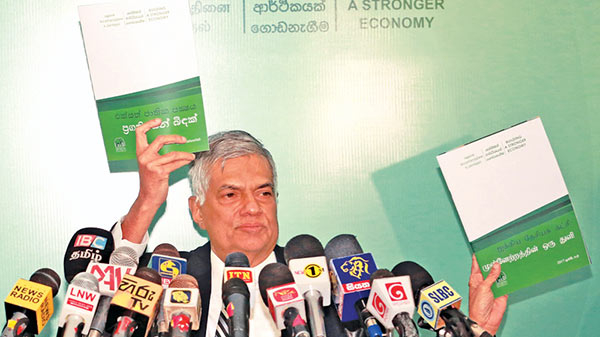 Prime Minister Ranil Wickremesinghe was buoyant yesterday when he presented the two year progress report of the government led by the United National Party.

Addressing the media and partymen at the Sirikotha party headquarters, an optimistic Prime Minister said the United National Party succeeded in bringing an era of transformation to the country.

Prime Minister Wickremesinghe said his party, when in power has always brought out a change in the country adding that it is prepared to face challenges.

The Prime Minister added that the past two years have been transformational for Sri Lanka and the party in the national government has strengthened Sri Lanka’s democracy, giving rights back to people and the media who can now comment freely and without fear.

“It is only with the UNP in the national government and with our economic plan that we can continue to build on on this progress, strengthen our economy and ensure that all Sri Lankans are sharing in our new properity”, the Premier said.

“The UNP in the national government has been delivering across the board for Sri Lankans. There should be no doubt about this. We are building a stronger economy,” the Premier said.

He added that the Government was able to help over 200,000 families to secure a home, improve the lives and security of hundreds of thousands of families and contribute to the UNP’s mission to ensure all Sri Lankans are sheltered by 2025.

“The UNP has already ensured 400,000 employment opportunities in the country, a nutritious pack worth Rs.20,000 for pregnant mothers and a salary increase of Rs.10,000 to government servants.

“The Party is committed to ensuring that ordinary families, vulnerable people and poor communities in our society receive the necessary support. Therefore the UNP continues to provide Rs.20,000 to pregnant women,” the Prime Minister said

He added that the government is lowering the cost of living for ordinary families by reducing the prices of essential items including the price of fuel which has been reduced up to 22%.

The Prime Minister said the party could make an immense difference for the betterment of the country by firstly tackling the crippling financial burden left by the previous regime by bringing down the debt and deficit which the country had no revenue to pay through a discussion held with the International Monetary Fund (IMF). “The UNP is building a stronger economy and making solid progress and the biggest development achievement is that we are going to repay the debt in our lifetime.

Therefore, undoubtedly these two years has been transformational for Sri Lanka, the Prime minister said.

“Under the UNP, Sri Lanka attracted 2 million visitors for the first time in history and increased foreign investment attracting investments into strategic infrastructure projects necessary to sustain economic growth. Also, the UNP has been able to secure freedom for Sri Lankans by regaining the GSP+ trade concessions from the European Union giving duty free access to our biggest export market,”Prime Minister Wickremesinghe added.

“In 2016, the UNP introduced the “Nearest School is the Best School” to develop 600 schools and upgrade primary and secondary schools. Also, Sri Lanka launched the first free insurance policy for school children in South East Asia under this government,”Premier Wickremsinghe said.

“The government is also bringing back stability and security so that people can enjoy peace of mind and live without fear. Since the UNP took office, serious crime rates have declined by almost a third,” the Prime Minister said.

Prime Minister Wickremesinghe added that the country was in utter chaos under the Mahinda Rajapaksa regime.

“Denial of human rights, rampant fraud and corruption were the order of the day during the Mahinda Rajapaksa government,” the Prime Minister said.

“Now there is rule of law in the country and crime has gone down. This is the difference when the United National Party is in power,” the Prime Minister added.

6 Responses to PM OPTIMISTIC OF THE FUTURE

Home » PM OPTIMISTIC OF THE FUTURE