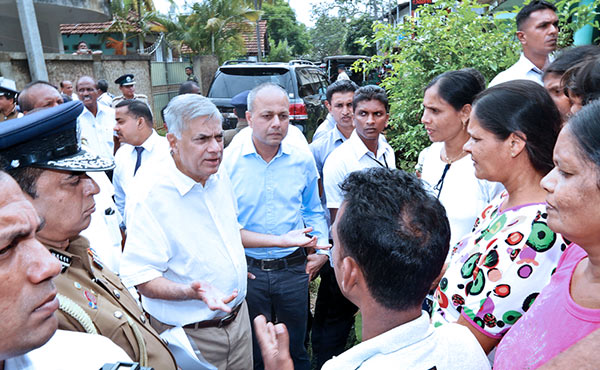 Prime Minister Ranil Wickremesinghe who visited Gintota in Galle yesterday in the aftermath of the tense situation that prevailed in the area said that stern legal action will be taken against those responsible for the violence.

The Prime Minister who met members of the Muslim and Sinhala communities living in the area was responding to the general request made by the people to bring the offenders to book.

The members of the two communities told the Prime Minister that the Sinhala and Muslim communities had been living in the area in peace and unity for centuries and requested him (Prime Minister) to ensure that all forces responsible for an unnecessary clash be identified and severe punishment given to them.

They also requested the Premier to ensure that security in the area is strengthened and maintained until community life returned to normal.

The PM who directed security officials to maintain security in the area, said extremist elements, in both communities, were trying to make use of such minor incidents to disrupt national unity and achieve their petty objectives.

The Prime Minister further said that certain individuals were trying to set the country on fire by spreading false rumours through Social Media websites and also trying to instigate people by making telephone calls and added that legal action will be taken against rumour mongers.

While noting that certain people had suffered property damage, during the incident, Prime Minister Wickremesinghe said the government will take steps to provide compensation for the damages caused.

When the people pointed out the need to strengthen the community Police operations in the area IGP Pujith Jayasundera who was on hand pointed out that steps had already been taken in this direction.

The Prime Minister went to say that that the majority in this country elected President Maithripala Sirisena in January 2015 and appointed a Good Governance government with the objective of strengthening and ensuring national unity and reconciliation. Forces opposed to this were always trying to seek petty gain by creating disunity among the people

Nineteen persons were arrested by the Police in connection with the incidents that occurred on Friday and they were later remanded until November 30 after being produced before Galle Magistrate NIshantha Peiris.

On Thursday, five persons including a former Pradeshiya Sabha member were arrested and remanded. Accordingly, 24 persons have been remanded, so far, suspected for provoking ethnic violence.

Subsequently, the IGP, who rushed to Galle, following the incident directed all forces to bring the situation under control and personally visited the affected households of the area and instructed his officials to evaluate the damages caused to the houses and submit to him a full-scale report.

Meanwhile, Police Media Spokesperson SP Ruwan Gunasekara who arrived in Galle, held a media conference to brief on the situation, after visiting the Gintota area on Friday.

Addressing the media, he said that attempts by a certain extremist groups to escalate ethnic strife , making use of a trivial matter, were foiled successfully with the quick and prompt intervention of the Police, STF and Tri-Forces.

“Some Social Media carry false and misleading information about the incident. We launched a special investigation to detect such elements,” he added.

“According to information collected by us, so far, 30 houses and sales outlets in the area have been damaged. A special Police investigations team is examining the damages, a report of which will be prepared and submitted soon. Five injured persons have been admitted to hospital. Their conditions are not serious,” SP Ruwan Gunasekara said.

“Following a directive of the IGP several olice, STF and Tri-Forces detachments have been deployed in the area to maintain law and order following which the situation in the area returned to normal. However the police and Tri-Forces protection will continue,” SP Gunasekara assured.

As a result of clashes between two groups, a special meeting was convened at the Galle District Secretariat, with the participation of leading religious dignitaries and political leadership of the area.

Home Affairs Minister Vajira Abeywardana said all those who are found responsible for sponsoring incidents of communal discord would be dealt with seriously irrespective of their political or personal considerations.

“We are preparing a full report on the damages and loss to people and property. On completion of the report we will make arrangements to compensate all those who were affected in the incident, the Minister assured.

At the above meeting it was decided to issue a common communiqué requesting with the public to uphold the traditions of ethnic harmony, signed by the respective religious leaders of Galle.