PM: will Gotabaya seek pardon for sins of Rajapaksa regime? 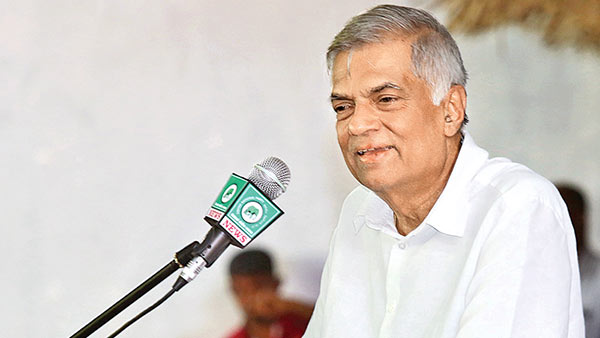 Prime Minister Ranil Wickremesinghe yesterday asked whether SLPP Presidential nominee Gotabaya Rajapaksa would seek pardon for all the sins committed by the previous Rajapaksa regime. He noted that Rajapaksa, in his nomination acceptance speech on Sunday, had pledged to ensure an environment free of fear and suspicion for each and every citizen born in this country.

The Prime Minister opened the scheme on the invitation of Housing, Construction and Cultural Affairs Minister Sajith Premadasa who was also present on the occasion. The Prime Minister said the murder of Raviraj, Sivaram and Thajudeen and, abduction and disappearance of journalist Ekneligoda and, assault on journalist Keith Noyahr and Editor and Journalist Upali Tennekoon, the attacks on the Udayan and Sirasa media offices, the Rathupaswala shooting of people who demanded pure drinking water and, the mass murder of inmates at the Welikada Prison were some of the horrendous crimes committed during the Rajapaksa regime for which the SLPP Presidential nominee should seek pardon from the public.

Other misdeeds of the Rajapaksa regime included the abduction of people using the white van gangs and the summary dismissal of the then Chief Justice.

Prime Minister Wickremesinghe also questioned whether the SLPP Presidential aspirant would seek paradon from women abused by a Pradesheeya Chairman and the family of the foreign woman tourist raped and murdered by a Pradesheeya Sabha chairman as well as innocent urban shanty dwellers forcibly evicted from their abodes they had occupied for generations.

8 Responses to PM: will Gotabaya seek pardon for sins of Rajapaksa regime?