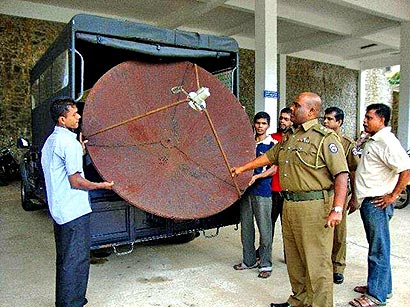 Nawalapitiya Police yesterday raided an illegal cable television station which had been operating from an estate for several years.

The main suspect along with the technical equipment were taken into custody by the Police.

The illegal television station had been operating from Ketabulawatte Estate near Nawalapitiya town. According to Police sources, the technical equipment used to transmit programs were fixed inside the ceiling of an abandoned house.

The raid was carried out by the Nawalapitiya police after monitoring the activities of the station through informants.

The subscribers and technical staff of the station had kept it a secret though it had been operating for several years.

Investigations are on to check if the television station has had links with the LTTE, Nawalapitiya police sources said.

Nawalapitiya Police believe that this station was able to provide information to illegal organizations. Police also found several CDs in which final fights between the Security Forces and the LTTE are included. The suspects were to be produced before Nawalapitiya Magistrate Purnima Poornagamage.

Investigations are being carried out by the Nawalapitiya police led by OIC Udaya Wickramaratne on the directive of Central Province Senior DIG Gamini Nawaratne.