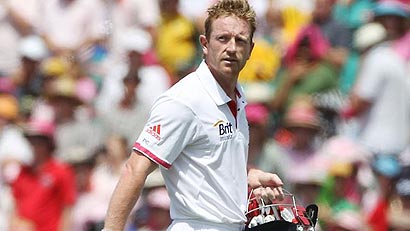 AN emotional Paul Collingwood has told teammates he will retire from Test cricket at the end of the Sydney Test.

Collingwood made the announcement public this morning before addressing teammates in a huddle for a second time before play started at the SCG.

Collingwood will continue to play limited overs cricket, including Twenty20’s and has his sites set on the 2011 ODI World Cup in India, Bangladesh and Sri Lanka.

The 34-year-old’s head was on the chopping block after a string of poor performances, culminating in his dismissal by Michael Beer yesterday.

Collingwood said he was more than proud to have represented England a Test Level, the England and Wales Cricket Board reported.

“Representing England always been a dream of mine and I’ve been fortunate enough to have enjoyed some amazing highs throughout my Test career,” he said.

“I’m proud of the fact that I’ve always given my all for the England Test team but I feel that this is the right time to leave Test cricket having reached some very special achievements, none more satisfying than retaining the Ashes in Australia.

“I also feel now is the time to ensure some of the younger players are given an opportunity at Test level as we have a wealth of talent pushing for places in the England Test team.

“Clearly I still feel I have a huge amount to offer England in terms of limited overs cricket and I’m looking forward to the opportunity to continue leading the Twenty20 squad and playing a significant role in England’s ODI team.”

Collingwood began his Test career in 2003.

He led England to World Twenty20 glory in the Caribbean earlier this year – their first global one-day trophy.

“His performances have been admired and recognised by his team-mates and England supporters over many years and his tireless commitment in the Test match arena will be something he will always be remembered for,” he said.

“I’m delighted that Paul will be available to continue to make important contributions to our ODI and Twenty20 teams.”

3 Responses to The end for English batsman Paul Collingwood