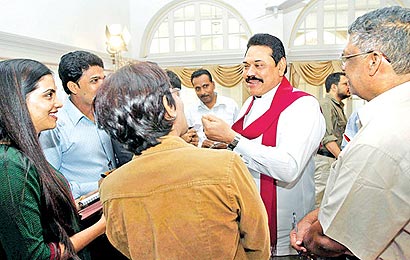 President Mahinda Rajapaksa said with regard to a political solution to the ethnic problem, a solution will be arrived at in consensus with all political parties depending on the proposals they make.

The President said so at a discussion with foreign correspondents at Temple Trees yesterday.

President Rajapaksa stressed that power sharing with the centre is very much on the table. He added that there is no room to devolve police powers.

Commenting on the alleged killing of an Indian fisherman by the Sri Lanka Navy this week, President Mahinda Rajapaksa stated that reports from the Sri Lanka Navy show there was no such attack. However, discussions are underway to prevent any such incidents. “We have had arrangements earlier but these will have to be revised given the new peaceful situation in Sri Lanka,” he said.

Explaining the situation, he said that during the conflict Sri Lanka prevented its fishermen from fishing in the Northern seas. He said that they are now able to do so, and there could be possibilities of misunderstandings and conflicts between fishermen from the two countries who are both Tamils.

The President pointed out the importance of relevant parties talking to each other in such matters which is in accordance to the Joint Statement issued by India and Sri Lanka in June last year.

Responding to a question posed by a journalist with regard to the summoning of Sri Lanka’s High Commissioner in India Prasad Kariyawasam by the Indian government, President Rajapaksa said that any government including India has the right to do so and even the Sri Lankan government will take similar action in such situations.

“We do not have any problem with that,” the President said. President Rajapaksa also said instructions are given to Government officials to expedite the distribution of flood relief and treat it as an essential service. He added that his visit to Batticaloa was cancelled due to bad weather but was in constant touch with developments there. President Rajapaksa appreciated India’s donation of flood relief and said that India came to Sri Lanka’s assistance without even a request. The relief material will reach Sri Lanka today.

Responding to questions with regard to relations with the West, President Rajapaksa said that it remains strong and positive attitudes in some countries towards Sri Lanka have improved. He referred to Canada’s revised immigration policies and LTTE arrests in countries such as Switzerland and Germany.

He said that rehabilitation of ex-LTTE cadres are ongoing and over 5,000 have been already released. “After 30 years of fighting terrorism, we were able to release them in a very short period as six months which is not an easy feat. No other country has been able to achieve such success,” he said. He added that others will be charged according to evidence. President Rajapaksa added that media has freedom to report and said he appreciates media bringing up various issues which makes it easier for the Government to act fast.