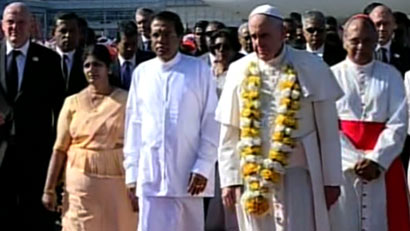 The special aircraft carrying Pope Francis and the Papal delegation touched down at the Bandaranaike International Airport at 9.00 a.m. this morning.

He was  greeted by President Maithripala Sirisena, the First Lady and thereafter by Archbishop of Colombo His Eminence Malcolm Cardinal Ranjith.

He was escorted to a special dais where a guard of honour was conducted by the Chief of Defence Staff.  The National Anthems of the Holy See and Sri Lanka was played. Thereafter His Holiness delivered a speech.

Prime Minister Ranil Wickremasinghe, several Ministers and a  distinguished gathering were present on the occasion.