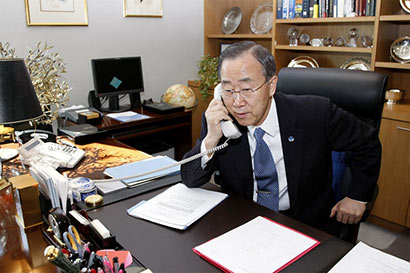 Ban, who is currently on a three-day trip to India, spoke on the phone with Sirisena, the UN chief’s deputy spokesperson Farhan Haq told reporters here today.

The UN chief congratulated Sirisena’s election and the successful conclusion of the presidential polls. Ban and Sirisena discussed the “President’s 100-day plan and Sri Lanka’s post-war agenda. The Secretary-General affirmed continuous support by the UN to Sri Lanka,” Haq said.

Last week, Ban had welcomed the constitutional transfer of power in Sri Lanka, applauding the Sri Lankan Elections Commission for its professionalism in ensuring a “peaceful and credible election,” according to a statement released by Ban’s spokesman.

The UN chief had also commended the efforts of the candidates, including those of Rajapaksa, law enforcement agencies and civil society for upholding and respecting democratic governance.

The statement had said that Ban looked forward to working with Sirisena and that the UN would continue to support development, reconciliation, political dialogue and accountability in Sri Lanka.

The South Asian island nation has experienced a spate of ethnic and sectarian attacks since its 30-year civil war which pitted the government against Tamil insurgents ended in 2009.

Most recently, a tide of violence and recrimination against Sri Lanka’s Muslim and Christian communities by Buddhist groups with extremist views has threatened to divide the country once again, PTI reports.