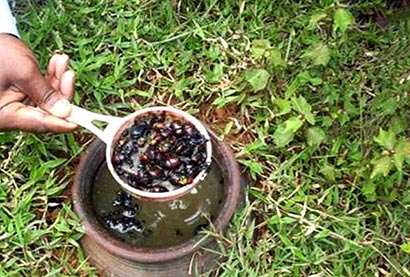 Andiyur village in Erode district is well known for groundnut and sugarcane cultivation. But the farmers there face a recurring pest problem called white grub that makes it difficult for them to harvest a good yield. Managing the pest proves difficult for the groundnut cultivators as the grub lives under the soil and its lifecycle takes a year to complete.

It feeds on the root system of the crops and the plants wither and die. Annually nearly 41 per cent of crop loss is being reported from this region.

“Chemical control measures did not prove to be a long-standing solution for this and the pest keeps recurring,” says Dr. K. Alagesan, Program Co-ordinator, Myrada (Mysore Resettlement and Development Agency), Gobichettipalayam, Tamil Nadu.

A progressive farmer G.R. Sakthivel, who grows sugarcane and groundnut, repeatedly faced losses due to this pest.

“I used almost all the pest preventive measures available in the market for this but the problem continued. No amount of specialist intervention could offer a long standing solution to this.

“One day I casually happened to see a large number of the grubs moving on a heap of de-oiled castor cake I had left near my cow shed. This made me think of using this as an effective trap for the insects. I tried it first in a small mud pot in my sugarcane field and found that it had the desired result. I started increasing it for my entire crops,” he says.

Detailing the method on how it should be done, the farmer says:

“Select some five litre mud pots and bury them till the neck at different places in the field. Pulverise about 5kg of castor seed and mix it in five litres of water. Keep this solution undisturbed in a plastic drum for 10 days.

On the 11th day pour two litres of this liquid in all the buried pots and fill it with water till the neck portion. The odour that comes out from the pot attracts the pest towards it.

“In addition to white grub this solution is also found effective to control the notorious rhinoceros beetle that infests coconut trees,” explains the farmer.

In fact, coconut growers are well aware about the rhino beetle and its damage to fronds and small nuts. This method is a good way of controlling it and does not require a big investment.

The mud pot with the solution needs to be buried near the trunk of the tree and attracted by the odour from the pot the insects come towards it and fall into the pot and die.

Collect the dead insects found floating in the pot once every 2 days and keep filling the pot with solution whenever the quantity gets reduced. The solution can be kept for a period of three months, according to Mr. Sakthivel.

Myrada did an extensive study on this indigenous technology over a period of four years and found that about five pots suffice for an acre. This method is found to reduce the plant protection expense to 20 per cent since the cost of the entire process comes to Rs.200-250.

If farmers use the conventional methods they need to spend anything from Rs.450 to 600 for buying chemicals.

Though the farmer developed this concept some 10 years back, today nearly 300 farmers in the region follow this for their groundnut, sugarcane and cotton crops.

“We found that there is an 80 per cent reduction in white grub and rhinoceros beetle pest population and 35-40 per cent yield increase in sugarcane and groundnut crops when this castor trap is used.

“Though, during the start of the green revolution fertilizers and pesticides led to high yields in hybrid crops, later on it led to serious issues like development of insect resistant, resurgence and residual problems.

“Natural and non pesticidal methods for controlling pests have been in place since time immemorial. But sadly the present generation of farmers has either forgotten their efficiency or are not prepared to accept them,” says Dr. Alagesan.