Preparing for the Challenges to Buddhism and Buddhists 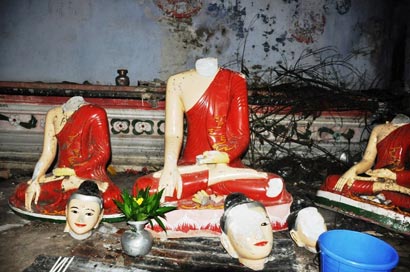 When 25,000 Muslims mobs attack over 27 Buddhist sites and homes destroying historically valuable artifacts and treasures across 5 towns and over a dozen villages, it clearly shows that it was no spontaneous attack. How could 25,000 Muslims gather if it was not planned? The damage is colossal. Gold Buddha statues, Tripitaka, ancient temples the very places that Muslims taken refuge in during 1971 to escape the wrath of the Pakistan army. Of the 153m Bangladesh population Buddhists comprise less than 1% though it was one time a Buddhist country.

Sri Lanka as a proud country feels insulted for the incident in Bangladesh and we show solidarity with all other countries where Buddhists are being discriminated against.

Perhaps Muslims may like to answer what the difference is in feeling insulted for defaming the Koran or the Prophet and their own reaction of destroying other religions and their historical value? Should Buddhists not feel insulted as well? Is it ok for Muslims to react with anger and take to the streets when a cartoon or video emerges but not ok for Buddhists to cry foul when the Bamiyan Buddha was blown up despite repeated requests appealing not to do so? Buddhists have never posed a threat or threatened Islam and even otherwise no religion has any right to violently silence other religions. No one should also expect Buddhists to remain tolerant simply because it has been a religion of peace and philosophy when its existence is currently being challenged.

The politics behind religions is not without bias. It is why the US went out of its way to apologize profusely for a video that resulted in wide scale violence by Muslims over a movie that none of the mobsters probably had even watched. Yet, when the incident in Bangladesh occurred to a religion that is arguably the most peaceful religion on earth not much prime time coverage was given and hardly so in the mainstream media. Ironically, Sri Lanka’s own Buddha Sasana Ministry was quick to issue a statement deploring the video against Islam but the same Ministry appears to have forgotten to issue a statement on the Bangladesh violence when it is a Ministry specifically mandated to take care of the interests of Buddhists.

In a country with over 74% Sinhalese Buddhist the level of tolerance is certainly something that needs far more attention than given. Is it not obvious that the electronic and print media are controlled by non-Buddhists who take every turn to admonish and humiliate Buddhists? Can the editorial board deny that they give unbiased coverage and allocate space for all religions alike? Why was it obvious that the incident in Dambulla was articulated in such away to project that the Buddhist priest erred and many editorials were dedicated to this isolated incident whereas not a single editorial has mentioned at length the historical tragedy that took place in Bangladesh or the issues Buddhists have faced in other South East Asian countries again as a result of Islamic fundamentalism? Does everything have to be about power and money? The Muslims cannot deny the violence. Is it something that can always be blamed on the Jews or the West? Islamic imperialism stretched over Africa, Asia, Middle East and even part of Europe and these conquests lasted far longer than the Europeans and reaped far more success than the Christian conversions. But over the years it has shown to be self-destructive but like all of us Muslims have the power to make choices yet Jihad has become a socially accepted channel for the present wave of violence taking place and brewing and it is for the Muslims themselves to ask why they would tolerate such if they reject violence.

This is not to blame Muslims en masse and certainly not to engage anyone to hate another religion or to create any type of dissent but the simple argument that needs to be conveyed is that if one’s religion is sacred so to is another’s. If one’s religious rituals and nuances are to be tolerated then it is natural that tolerance must reach out to accept other religions as well. It is when there is an imbalance that statements like the one made by Australia’s PM Ms Julia Gillard giving ultimatums emerges:

‘Most Australians believe in God. This is not some Christian, right wing, political push, but a fact, because Christian men and women, on Christian principles, founded this nation, and this is clearly documented. It is certainly appropriate to display it on the walls of our schools. If God offends you, then I suggest you consider another part of the world as your new home, because God is part of our culture.’

In the same context the Japanese Government has taken many measures to keep Muslims, Jihadists and even Missionaries at bay. Japan is the only nation that does not given citizenship or permanent residentship to Muslims only temporary residentship is given and they must speak Japanese and can carry out Islamic religious practices at home. Arabic or Islam is not taught in the University of Japan, the Quran (in Arabic) is prohibited from import. Islam is prohibited from being propagated. Getting a house on rent is an almost impossibility. It is prohibited to start Madrasa’s. Similarly, Japan has strict restrictions on conversions to Christianity, those that convert and who help convert are severely punished, a foreign national involved in conversions if found guilty is asked to immediately leave Japan – as a result Christian missionaries have failed miserably in Japan as there is no rise in number of Christians in Japan. A good lesson for all is that Japanese do not convert to other religions for money, they remain loyal to their religion and refuse to convert even if tempted with large remunerations!

Unlike most Muslim dominated nations, Sri Lanka’s Muslims are currently facing challenges themselves. The once conservative Muslims are today being influenced by a wave of radicalism that is forcing them to change their attire and promote Sharia laws …. Who or what is promoting this and what are the dangers that are likely to slowly arise is nothing that should be ignored and nothing that a Government should silently watch and not do something about. Many Muslims reluctant to go with the trend have little choice and needless to say must silently accept this new influence taking place. We are well aware that groups of radical teachers are streaming in to lay the backdrop.

Let the Sri Lankan Government remember that it is with the Sinhalese Buddhist votes that they come into power and continue in power but tragically these very elected parliamentarians have preferred to depend on the sources that funds their power sideling those that brought them into power.

Would silence not lead to the eradication of Buddhism as has happened in Bangladesh? Is it not time to galvanize a new force of Buddhists from across the world in a non-violent movement that would negate the current wave of discriminations Buddhism is suffering from as a result of the natural nature of the Buddhist religion/philosophy? Can we trust in the present Buddhist moderate leaderships to deliver such a global endeavor? Those that many looked up to have fallen prey to the vagaries of politics with power and good living coming above the vision to protect the future of a historic and noble religion. Is it not for this reasons that a new emergence is taking place with a Buddhist revival bringing Buddhists together without any political flavor? Is this not the right way to go? Why is it only Sinhalese and Buddhists who are accused of triumphalism? Is tolerance equated to mean that Buddhists tolerate in silence while all other religions can promote and progress their religion and progeny only? Would this silence not lead in time to the ultimate cleansing of an entire religion and possibly an entire indigenous race from Sri Lanka?

If Buddhism has spread throughout the world it has been not through force but by virtue of people understanding and accepting the precepts under which Lord Buddha offered his teachings. As a religion of personal acceptance it naturally faces challenges. With Asia seeing significant political and social change the importance of maintaining the significance of Buddhism is nothing that needs to be reinforced. For the West having undergone the severities of modernization the rise in Buddhist worshippers are on account of spiritually reawakening themselves from the intense social and political changes they had gone through. When the West is embracing Buddhism it would be tragic if Asia does not protect what it already has – no religion can afford such internal harmony. What must not be done is to commercialize and co-opt Buddhism with capitalist ideology.

Nevertheless there is a growing emergence in not only thought but of the need for action bypassing the moderate Buddhist guidance through a bala senawa that is building a greater need to re-assert the place of Buddhism in Sri Lanka which had been sidelined for the lack of personalities such as Anagarika Dharmpala in the present context. It is gathering formidable force in a non-violent message to say that the place of Buddhism enshrined in the Constitution of Sri Lanka needs to be not simply a beautifully worded document but given the scenario of what is taking place Buddhism must be protected, preserved and promoted and the excuse of tolerance need no longer be reason to exclusively sideline Buddhism into oblivion while other races forge ahead with their agendas silencing those that are Sinhalese and Buddhist tapping man’s weaknesses.

So long as policy prevails for all religions alike the present feeling of discrimination, bias and violence would not be taking place. It is when tolerance for some and not tolerance for others that has led to the natural rise in Buddhists now gathering together to create a formidable force in Sri Lanka and possibly around the world and that will be a force to watch out for in view of its peaceful and inner spiritual nature giving people the salvation that they now require.

6 Responses to Preparing for the Challenges to Buddhism and Buddhists

Home » Preparing for the Challenges to Buddhism and Buddhists