President at Moragahakanda: ‘Yes we can’ paid dividends 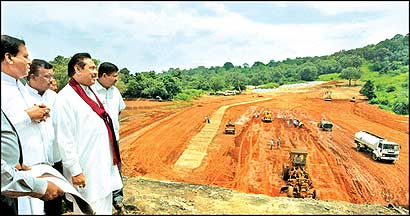 President Mahinda Rajapaksa yesterday emphasized that the present Government’s ‘Yes we can’ approach had paid rich dividends in delivering the people’s desired expectations in many spheres including the defeat of terrorism and development.

He said that the difference between this Government and other regimes was that the present one not only possessed a vision and commitment but also had an unwavering,viable practical approach to implement the above. Addressing the farming community of Moragahakanda during an inspection progress review tour of the Moragahakanda-Kaluganga Multi-Purpose development project, the President said that the mega project, which some categorized as an impossibility, stood as testimony to this commitment.

Addressing the farming community soon after his progress review tour where he vested with the people several concluded infrastructure mechanisms aligned with the project worth over Rs 700 million (including two bridges), the President said that the project which remained as more rhetoric of past regimes during the last 40 years had become a reality due to the bold approach taken by this Government.

The President pointed out that even though the Government first did not have foreign funds to go ahead with the project it had never hesitated and had allocated Rs 500 million from the State coffers to initiate it.

Later, the Government had acquired the necessary funds to see it to a completion both from within the country and from outside of it, the President said while expressing his satisfaction on the progress made so far.

The President also noted that the same bold approach had helped the Government defeat terrorism when all odds was stacked against it.

On the occasion the President also stressed that the country’s economic base was agriculture.

He said that although the country’s ancestors had trod this path with success some regimes later had changed the trend and had resorted to depend on imports even for agricultural products.

But this Government had the foresight to give due prominence to agriculture and this has proven correct in the face of an impending food scarcity and changing weather patterns, he added.

He emphasized that as a person who hails from a remort village and a farming background he was determined to give agriculture its pride of place.

The President also said that his intention was to achieve equity in development by providing equal facilities opportunities to all irrespective of which region of the country they live in.

He said that the present development drive would be accelerated after the forthcoming Parliamentary polls and added that his intention was to create a society where everybody could live happily.

During the inspection tour the President declared open the completed 300 Metre long Moragahakanda bridge built across the Amban Ganga at a cost of Rs 308 million and also the Kapuyaya bridge, in addition to several other completed infrastructure projects.

Minister of Agriculture Development and Agrarian Services Maithripala Sirisena on the occasion presented a complete report on the progress of the project’s, it objectives, costs, plans ahead etc.

The Minister also said that even though some opposition politicians were spreading false rumours regarding lack of funds the Government had already acquired the necessary funds to complete the project. Moragahakanda and Kaluganga Development Project is the largest reservoir project to be taken up for development under the Mahaweli River Development Program.

Objectives of the Projects – To provide irrigation water facilities to 81,422 ha in the Dry Zone of Sri Lanka – Potable and Industrial Water Supply to Anuradhapura and Trincomalee towns – Generation of electricity by hydro power Location. The project area is located in the Central and North Central Provinces in Sri Lanka.

Project Configuration The project consists of (a) Construction of two major reservoirs namely; Moragahakanda and Kaluganga reservoirs, (b) A conveyance system consisting of two tunnels and transfer canals and (c ) A power house of 20 MW installed capacity.

Project Cost : Cost benefit the investment cost of the project is US$ 382 million. The Economic Internal Rate of Return (EIRR) is 22 percent. Direct Benefits Agriculture: Cropping intensity which varies less than 100 percent to 154 percent in the different areas will be raised to around 181 percent on the average.

The direct benefits include increased rice yield per hectare with an additional agricultural production of 109,000 tons annually. The net annual agricultural benefit will be US$ 27.7 million in financial terms. Inland Fishery: The average annual fish production potential of the reservoir is estimated to be around 4,700 tons per year, representing a net benefit of US$ 1.67 million annually.

Potable and Industrial Water Supply: An increased supply of 64 MCM (by the year 2032) could be ensured towards meeting the potable and industrial water needs in the district of Matale, Anuradhapura, Trincomalee and Polonnaruwa from the surface water sources in the Ambanganga basin and its associated tanks and canals with the implementation of the project.

4 Responses to President at Moragahakanda: ‘Yes we can’ paid dividends

Home » President at Moragahakanda: ‘Yes we can’ paid dividends