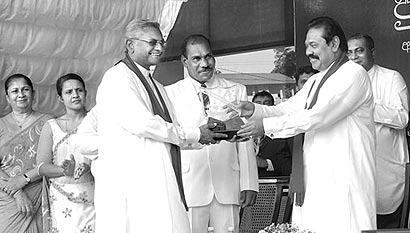 President Mahinda Rajapaksa yesterday said a positive change in attitude of parents is a must in respect of moulding the future generation.

Despite social differences such as low income, middle class or opulent families, majority of country’s children suffer from malnourishment according to latest statistics presented to the State Cost of Living committee, said President Mahinda Rajapaksa.

It is also learnt that cause for mal-nourishment in children is not only due to poverty but erroneous food habits and practices of parents owing to both ignorance and negligence, the President said.

Accumulation of academic knowledge only is not sufficient. children should be fostered with good virtues, values and good practices thereby creating useful future citizens who love and care for the motherland.

Priority should be given to extra and co- curricular activities in addition to providing subject knowledge. Through sports and athletics, children with powerful personalities could be produced, he said.

Richmond college is a remarkable educational institute which has fashioned renowned patriotic sons of motherland.