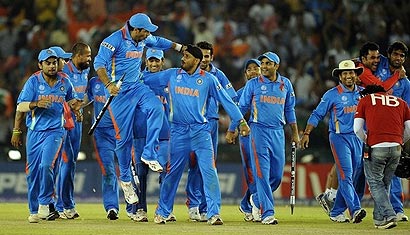 India’s dream of a World Cup triumph at home is one step closer after their bowlers suffocated Pakistan’s batsmen to set up a 29-run victory in the semi-final in Mohali. Saturday’s decider will now be a battle of the hosts, and while Sri Lanka might have been surprised by the strength of India’s bowling effort, they would also have taken note of a slightly lacklustre batting performance.

In the end, India’s 260 for 9 was enough as their bowlers did a fine job, but had Pakistan helped themselves, the target could have been so much more gettable. Sachin Tendulkar was dropped four times in his 85, MS Dhoni was put down once and while Wahab Riaz was extremely impressive in collecting five wickets, Umar Gul had one of his most forgettable days, wilting under the pressure of a World Cup semi-final.

By contrast, India’s display in the field was much more professional, and that was the difference in a match that lived up to the extreme pre-match hype. The decision to leave R Ashwin out to make room for Ashish Nehra was an odd choice on a pitch offering plenty of spin, but Nehra and his bowling colleagues built the pressure and gave Pakistan’s batsmen little to attack after they made a promising start and reached 70 for 1.

The Indians didn’t give away an extra until the 37th over of the innings, and the way they put together strings of dot balls and tight overs was key to their success. Munaf Patel picked up two victims and Yuvraj Singh made up for his golden duck with a pair of wickets, but the most important breakthrough came when Harbhajan Singh bowled Umar Akmal for 29.

Akmal had struck a pair of sixes off Yuvraj, driving him over the sight screen and pulling him over midwicket, and anything was possible while he was at the crease. But Dhoni called on Harbhajan to replace Yuvraj, and with the first ball of his spell he came around the wicket and pushed one across Akmal, taking the off stump when the batsman played for the spin.

Shahid Afridi also fell to Harbhajan when he skied a catch off a full toss, and the obdurate Misbah-ul-Haq was left to steer the chase. He found it difficult to lift his tempo and was the last man out, caught on the boundary for 56 in the final over, but he ate up 76 deliveries and had he shown some more intent earlier, Pakistan might have had a chance.

It was a disappointing end for Pakistan after their top order gave them hope. Mohammad Hafeez made an encouraging 43 before a string of eight dot balls from Munaf brought a brain-fade as Hafeez tried a premeditated paddle sweep from outside off stump and edged behind to Dhoni.

Soon after, the loss of Asad Shafiq brought the Mohali crowd to life, when he tried to cut a Yuvraj delivery that was much too full and straight, and the middle stump was knocked back. Shafiq had made 30 and had displayed a cool temperament until that point, but the required run-rate started to balloon, and Pakistan never recovered.

But while India have booked a place in the final, they must hope they haven’t used all their good fortune too soon. Tendulkar might be the finest batsman of his generation, but today he was the luckiest, dropped on 27, 45, 70 and 81. It seemed as though he was going to bring up his 100th international century with one of his least convincing innings.

Misbah at midwicket was the first to put him down, before Younis Khan spilled a regulation chance at cover, both off the bowling of Afridi. The third opportunity came when Kamran Akmal didn’t move his hands quickly enough to a thick edge, again off Afridi, and while that was a tough opportunity, a pull to Umar at mid-on from the offspin of Hafeez should have been taken.

Before he had any of those lives, Tendulkar had survived two very tight calls on 23: an lbw decision that was given out by Ian Gould but on review proved to be spinning down leg, and a near-stumping the next delivery when he just got his back foot down in time after losing his balance reaching outside off. When Tendulkar was finally taken at cover by Afridi off the bowling of Ajmal, Pakistan’s relief was evident.

Soon after, a scratchy Dhoni, who was also dropped by Kamran, made the mistake of challenging Simon Taufel on an lbw decision. Dhoni had 25 when he missed a Riaz delivery that pitched just in line and was hitting the stumps. It was the second outstanding call by Taufel, who had given Virender Sehwag lbw in a similar fashion earlier, even though the left-armer’s angle meant pitching outside leg was a possibility.

Riaz was the man who Afridi had to thank for keeping Pakistan in the contest after India made a strong start and reached 114 for 1 off their first 18 overs. After Gautam Gambhir was stumped wandering down the pitch against Hafeez, Riaz grabbed two wickets in two balls – Virat Kohli caught at backward point and Yuvraj bowled by a low full toss for a golden duck.

Nobody looked as fluent as the crease as Sehwag, who took 21 off Gul (0 for 69) from the third over of the innings. What looked like a 300-plus total in those early overs became 260 when Suresh Raina helped them recover from their middle-order failures.

It was enough, but India’s batsmen will need to improve if they want to lift the trophy on Saturday. For now, they can dream of their first World Cup in 28 years.

1 Response to India scrap their way into World Cup final