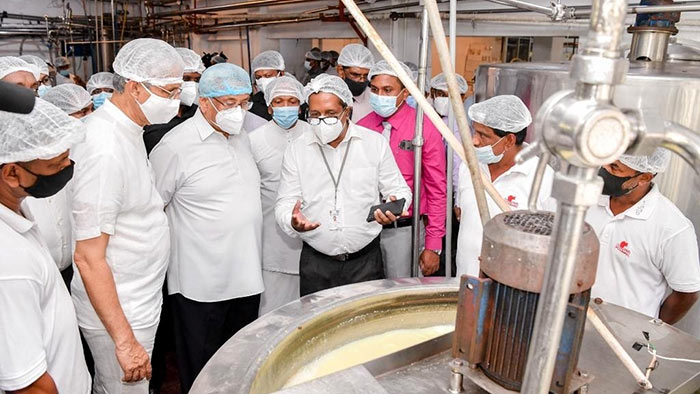 The President made these remarks while inspecting the Milco Factory at Narahenpita yesterday morning (25). The President paid special attention to the disparity in prices at the district level when purchasing liquid milk. The President said that the process should be fully monitored to prevent irregularities by intermediaries when they transport milk purchased from the dairy farmer to Milco.

promoting the consumption of liquid milk. The President also stated that there should be no change in the prevailing prices and that the consumer should not be burdened,” the President’s Media Unit said, issuing a press release.

During his visit, President Rajapaksa inspected the process of collecting liquid milk as well as the process of making dairy products. With a staff of nearly 1,500 in four factories located in Ambewela, Digana, Polonnaruwa and Narahenpita, the company has a capacity to process 700,000 litres of milk daily. However, only 120,000 litres are collected daily.

The President instructed officials to cultivate grass in the unused lands under the National Livestock Development Board (NLDB) and to develop the Milco Factory at Narahenpita as the main centre for the factories at Digana, Ambewela, Polonnaruwa and Badalgama.