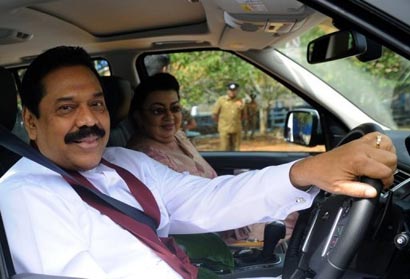 Sri Lanka’s first Expressway was ceremonially declared open a short while ago by President Mahinda Rajapakse. The President opened the access road to the Expressway from the Pinnaduwa interchange in southern city of Galle.

President Rajapakse who is also the Highways Minister marked the opening of the Southern Expressway by unveiling the commemorative plaque at Welipenna, one of the eight interchanges on the toll road.

The E- 01 Southern Expressway will be open to the public from 6 pm today (27) following the end of the opening ceremony while the toll for the complete journey for a car will be Rs. 400.

The 95-kilometer expressway runs from Kottawa in Colombo district to Pinnaduwa in Galle district.

The four-lane expressway is expected to enable motorists to reach the port city of Galle within one hour at a maximum speed of 100 Km per hour.

A public rally to mark the opening of the Expressway will also be held at the Karandeniya public grounds under the patronage of President Rajapakse.

The second phase of the development will see the expressway extended to Matara and is slated to be opened in 2013.