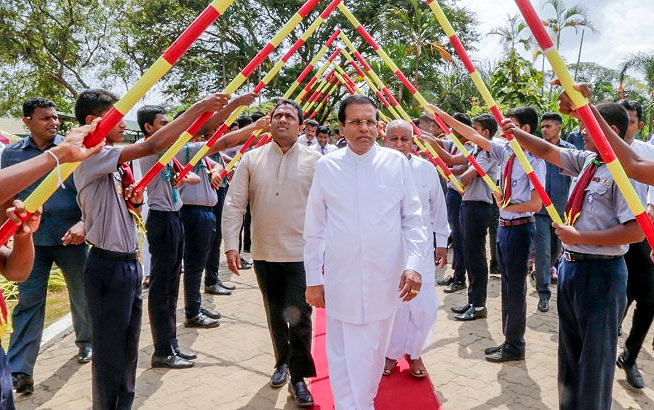 President Maithripala Sirisena emphasized the need of Line Ministries and Local Authorities working together in consensual as well as friendly manner.

If there is dispute occurred regarding the rights and privileges between these two institutions, the people who benefit through these institutions will be affected, the President further said.

The President made these remarks participating in a programme held at the Polonnaruwa Royal College, yesterday (30) to enhance educational excellence of the Polonnaruwa district.

President Sirisena further said that whatever government or whoever politician or else state officer has the responsibility of working together in consensual and friendly manner with the institutional structure established according to the constitution of the country.

The President addressing this meeting further emphasized that when fulfilling the responsibility of making the children of the nation intellectual individuals all must work with honest commitment together. The President further explained the need of giving guidance for the children to provide quality education as well as to create disciplined society, in a similar manner we provide resources needed for the education field.

This meeting was summoned with the aim of providing better and excellence education for the children while ascertaining the developments, progress, issues, challenges and shortages in the field of education of the Polonnaruwa district.

The President said that this programme can be consider as an initial programme of a series of programmes to be held to enhance the educational knowledge of the children as well as to build better younger generation who values ethical standards in the district. He also said that he has given instructions to the relevant sections to continue this programmes in the future by conducting this kind of event once in three months.

During this event, the Zonal Education Director apprised the President regarding the progress in the education sector of the Polonnaruwa district.

The Education officers, Education consultants and Principals presented issues relating to the education sector of the district.

Minister of Education Akila Viraj Kariyawasam, the Governor of the North Central Province P.B. Dissanayaka, Mr. Sunil Hettiarachchi, Secretary to the Ministry of Education and others participated in this event.