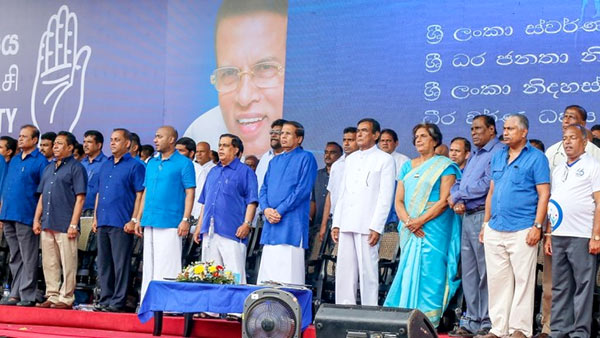 President Maithripala Sirisena emphasized that he will not allow anyone in the world to do anything for Retd Major Gen. Jagath Jayasuriya or any of Sri Lanka’s military commanders or war heroes.

He made these remarks addressing the 66th anniversary celebrations of the Sri Lanka Freedom Party (SLFP) held at the Campbell Park in Borella, yesterday (03).

The anniversary celebration was held on a very grand scale with the participation of a large number of activists of SLFP under the theme “Nokiliti Gamanak Jana Balaya-Hari Athata” (unsullied journey _ People’s Movement to correct Direction).

The President also emphasized that as the SLFP is strengthened as a democratic party, it will be built as a wider political movement which unites all the forces including Buddhist clergy, doctors, teachers, peasants, workers, fishing community and war heroes.

The President further said that the SLFP should be a party which comprise of intellectuals as well as scholars and it should be built as a party which follows the advices of religious leaders and the party should be a patriotic, people centric and Democratic Party, which will continue to promote the vision of S.W.R.D Bandaranaike and Madam Sirimavo Bandaranaike.

The President was of the view that as the United National Party selected the SLFP’s general secretary for the office of the President, the journey of the consensual government could move forward in a more cooperative manner.

The President recalled the press statement, issued when the invitations has been sent to all the MPs, as they will not join the party as long as the SLFP is with the UNP, and said that there are many evidences and factors in the history of the world, when a country is faced with challenges, all are united irrespective of their political views, ethnicity, religion and language differences, to take the country forward freeing the country from those challenges.

President Sirisena said that at all times corruption, fraud, malpractices and dynastic rule should be removed from the politics and the power given by the people should not be used by the politicians to strengthen their own agendas, but must use for the benefit of the country and its people. He further said that coming into the power as well as give up that power should be done according to the aspirations of the people. The President said in anyway a Member of Parliament or a President is not a factor of the power and all the time the general public is the core factor of the power.

The President recalled that the SLFP had a difficult journey throughout its history. He invited all members of the SLFP to unite to take the party towards victory.