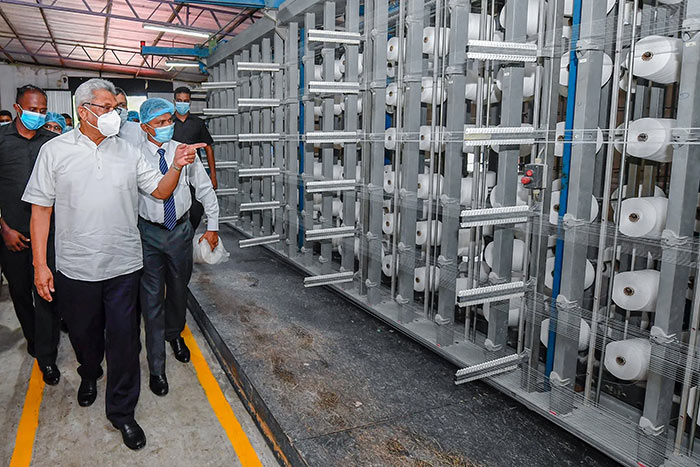 President Gotabaya Rajapaksa explores the possibility of assigning the larger percentage of supply of school and security forces uniform material to local industrialists.

President emphasizes that it is imperative to commence the production of standard and high quality textiles immediately.

Numerous garment industrialists conveyed that following the uniform coupon system, they had to shut down a number of their production facilities which were built at a capital expenditure. A large number of employees were laid off as well.

President first visited the Creative Textile Mill (Pvt) ltd in the Dankotuwa Industrial Zone. The company which was an investment of Rs 2,000 million remains shut down since 2015. Despite its discontinued production and income, the proprietor had to pay an interest of Rs 8 million to banks annually.

Creative Textile Mill has been importing threads from India, Pakistan and China to produce clothing material and managed to employ 500 people. The production capacity of the facility is to be increased to 100,000m per day. Annual school uniform estimated at 11 million.

President Rajapaksa motivated the managerial level staff to recommence their apparel production and requested them to figure out a plan for the self-employed entrepreneurs to contribute to the demand for the school uniforms.

“We can reduce the import cost by 68% if we can boost the local textile production”, President highlighted. It was also revealed that with the purchase of local garments, Ministry of Education could save up to Rs 80 million annually.

The President also drew attention to the issues raised by the local political authority and the people regarding the Industrial Estate of Dankotuwa.

Vanguard Industries (Pvt) Ltd, Kapuwatta, Kadana, which supplied 40% of the school uniform requirement before 2015, is now engaged in producing bed sheets and towels. President Rajapaksa, who observed the overall production process of the company, encouraged the management to increase the capacity to meet the demand for fabrics in the local market. The management stated that their establishment has the capacity to supply 30% of the school uniform material requirement.

President Rajapaksa also inspected Creative Textile Mill pvt Ltd, Wattala, a branch of Dankotuwa Textile Mill (pvt) ltd. Fabrics for the uniforms of the tri-forces are manufactured there. The Company employs over 1500 people. One of the primary functions of the company is to dye fabrics as required by the security forces. The Management told the President that imported fabrics are not tested and that there is a high cost involved in testing local fabric products.

They pointed out that laundry detergents are not properly regulated and as a result of this a significant amount of damage can happen to the colour of the fabric. The President urged them to take advantage of the assistance provided by the government to local industrialists and strive hard to win both local and foreign markets.

President Rajapaksa inspected the production of the National and Buddhist flags in the company and instructed the owners to increase the production to meet the local demand accordingly.