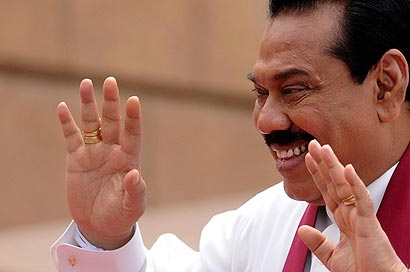 “People are today able to proudly call themselves Sri Lankans due to the great service rendered by him,” he said.

Ven Dhammaratana Thera said so delivering an anusasana when a group of Sri Lankan Bikkhus engaged in Dhammaduta activities in Singapore called on President Mahinda Rajapaksa in Singapore yesterday morning to invoke blessings on him.

The prelate said even though they are away from the motherland they regretted the utterances made and the unruly behaviour resorted to by certain sections of the people in Sri Lanka in the face of the world economic crisis. People should not act in a short sighted manner to seek petty ulterior motives as the escalation of prices of oil and other consumer items were beyond any ones control.

The Ven Dhammaratana recalled that they had to encounter serious problems and obstacles during their dhammaduta activities during the past 40 years due to the negative international image on Sri Lanka. “After assuming duties in 2005 President Mahinda Rajapaksa has defeated terrorism and steered the country on a correct path and it was the duty of all to support him in his endeavour to usher in development and progress for his people. He also noted that steps should be taken to forge links with Bhikkhus in Temples in the Northern parts of the country”,the thera said .