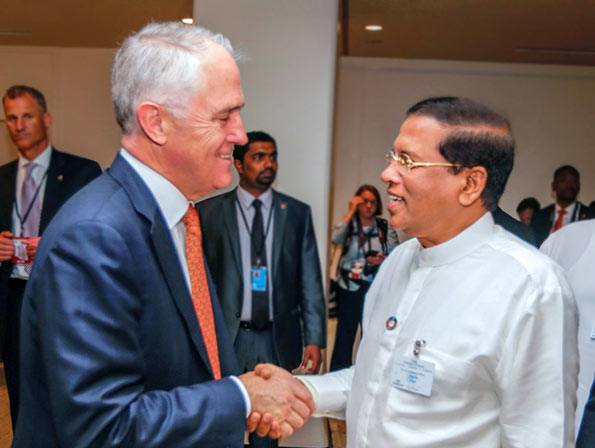 President Sirisena appreciated the assistance given by the Government of Australia to Sri Lanka for the country’s development drive and the Australian Prime Minister also extended his gratitude to the Government of Sri Lanka and the President for the cooperation extended towards Australia to curb human smuggling.Prime Minister further said that the Government of Australia has very liberal and humanitarian policy and welcome genuine migrants. However, stern action have to be taken regarding the organized human trafficking by criminal groups and in some situations it is connected to drug smuggling, he added.

According to him, it is not only a concern to Australia, but also the region too. In these circumstances Australia is very grateful to Sri Lanka for the cooperation extended to them in this regard.

The Indian Minister of State for External Affairs M.J. Akbar also called on President Sirisena at the UN Headquarters. During this meeting the President expressed his condolences on behalf of the Government and people of Sri Lanka over the recent violence in Kashmirresulting inseveral killings. President further said that the region should collectively act to curb such violence. Minister briefed President Sirisena regarding the situation that lead to the recent incident.

President Sirisena said such complicated situations should be dealt with patience and dialogue is the only way to find solutions to such issues.

The Indian Minister of State for External Affairs preferred some delays in commencement of some joint ventures in Sri Lanka and pointed out the need to expedite those projects. The President said he continuously examine the progress of proposed projects.

During the bilateral meeting they also discussed the fishermen issues and the President said the two Governments look at it as a human issue and whenever fishermen are arrested for illegal border crossing, the respective governments release them as early as possible. He also said, the Government of Sri Lanka and the fisherman in the North are concerned about the long term damage caused to the environment and the sea resources. Hence, an early solution should be found with the involvement of the fisher community. He urged the Central Government assistance for this.

Similarly, U.S. President Barak Obama, addressing the United Nations General Assembly for the last time as the U.S. President condemned the acts of terrorism and called for a global cooperation at this menace and he also said that this should also treat as a human issue.