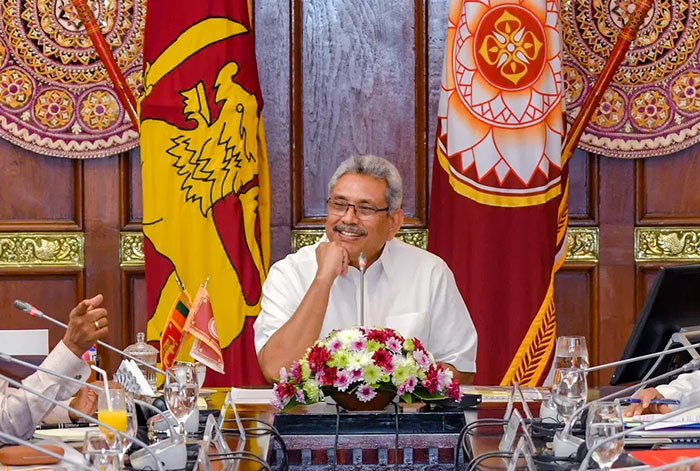 President Gotabaya Rajapaksa emphasized the need for formulating a national education policy on a priority basis to suit the rapidly changing situations.

This policy should not change with the change of a Government or a President, he observed during a discussion with the officials of the Ministry of Education held at the Presidential Secretariat today (5).

The Cabinet of Ministers, Parliament and the public should be fully informed when formulating an “education Policy”. Views of the academics, experts in the field and international standards should be taken into consideration, President added.

President commended the step taken by the Minister of Education to remove photographs and messages of politicians from school text books. The Ministry has to incur a large sum of money to re-print the text books with different images and messages once a new government comes into power, President pointed out.

The “Nenasa” computer technology programme has suffered a setback during the recent past. President instructed the official to revive the programme and continue it effectively.

Some subjects are taught using computer technology to Grade 10 and 11 students.  In order to reap full benefits from this process, the computer skills should be developed from Grade 5 upwards, the President said adding that if we do not follow this system, our country will fail in its forward march with modern global trends.

The President also pointed out the possibility of using computer technology as a solution to the shortage of English, Mathematics and Science teachers in rural areas. Children living in these areas can also receive the knowledge similar to that of children in urban areas through a formal strategy. President Rajapaksa also focused on providing necessary technical equipment and high speed internet facilities to rural schools in collaboration with government bodies and private communication companies.

The Minister of Education Dallas Alahapperuma noted that about 100 schools have not received a single application to be admitted to Grade 1. Meanwhile, the Governor of the Western Province, Dr. Seetha Arambepola stated that six schools in her province with less than a total of 200 students are located within 1km to each other. President, in response, advised the officials to examine the capability of integrating those schools under one roof. President added that it could assist in overcoming the shortage of teachers and elevate the standards of schools.

In addition, President Rajapaksa instructed to expedite the process of converting 19 National Colleges of Education to University Colleges that would produce teachers with a bachelor’s degree.

President stressed that the Ministry of Education must show positive outcomes in all sectors including Computer Technology within three to four years.