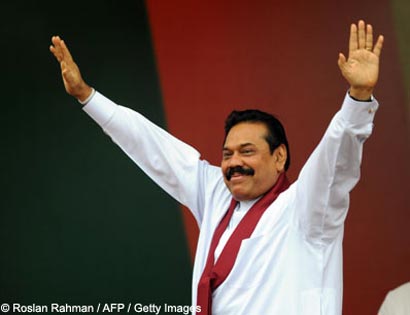 Becoming the very first Sri Lankan leader to be featured in TIME magazine’s TIME 100 Top Ten, Sri Lankan President Mahinda Rajapaksa has reached much popularity leaving behind all other top political icons and celebrity stars in the world and some Hollywood superstars in 2011.

Rajapaksa is on top of ‘Robin Hood of the information age’, Julian Assange who acquires secret and often controversial documents from government and corporate sources and then releases them to the public via whistle blowing site WikiLeaks.

With so little power Mahinda Rajapaksha achieved so much and pushed the Sri Lanka to greatness during last six years. When he got elected; with a narrow margin over his challenger, his party couldn’t even elect the speaker of the parliament; and the ruthless terrorist group LTTE was running wild in the country, bombing buses and public places filled with civilians. Within several years, Rajapaksa managed to win the excess majority of the parliament to his side, defeated the world’s most ruthless terrorist group (according to FBI), and generated an economic boom in island nation, while the whole world was tumbling into the worst recession in recent history.

His visionary leadership in Sri Lanka had doubled the per capita income lead the country to middle income status; made the Colombo Stock Exchange the best in the world and had initiated massive development programs including ports, highways and large scale leisure projects convincing the peace and harmony to the country.

Rajapaksa’s influence rippled globally, he held his ground against western superpowers who tried to rescue the ruthless megalomaniac Prabakaran, didn’t yield to economic sanction threats like cutting GSP+ tax incentives by European Union for alleged Human Rights violations in warfare by Western nations, Rajapaksa defeated western powers at the UN , by forming a novel coalition against western imperial powers. President Rajapaksa’s influence has already altered the course of Sri Lanka and perhaps the whole world as per many Sri Lankans.