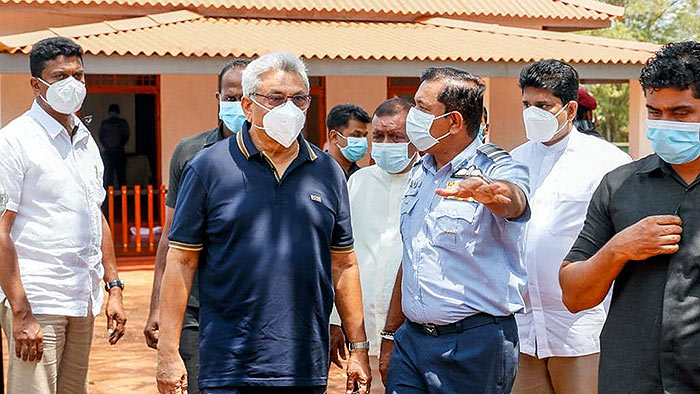 President Gotabaya Rajapaksa vested in the people the “Kanugahawewa Model Village” constructed by the Air Force at the request of the President after listening to the grievances of the villagers during the 04th “Discussion with the Village” programme held in Kebithigollewa.

Kanugahawewa village in the Kebithigollewa Divisional Secretariat was selected for the “Discussion with the Village” programme which was held on the 30th of December. LTTE terrorists frequently attacked Kebithigollewa. On June 15, 2006, the LTTE exploded a massive claymore mine targeting a civilian bus enroute to Kebithigollewa killing more than 68 civilians who lived in Kanugahawewa and surrounding villages. From 1995 to 1998 and from 2006 to 2008, the residents of these villages were forced to live in camps due to LTTE terror. Despite the end of that menace, villagers continued to experience many serious economic and social problems. The President instructed the relevant officials on that day to provide solutions for their land issues, repair works in connection with tanks and canals, development of major roads and by –roads and to improve health, education and transport issues as soon as possible.

Commander of the Air Force, Air Marshal Sudharshana Pathirana took over the task of meeting the housing needs and other requirements in Kanugahawewa Village to mark the 70th anniversary of the Sri Lanka Air Force. The President entrusted the responsibility of identifying the needs of the area and the task of submitting the plans in this regard to the Chief Incumbent of the village temple, the Divisional Secretary and the Chairman of the Pradeshiya Sabha and the Grama Niladhari.

President Rajapaksa who arrived in Kanugahawewa today first visited the Abhinawarama Temple and engaged in religious observances. Later the President called on the Chief Incumbent of the temple and inquired into the well-being of the Nayake Thera.

The President inspected the construction site of the proposed temple, the newly constructed Bodhigaraya and the Awasageya as well as the completed bell tower.

President Rajapaksa who visited the Kanugahawewa Primary School premises handed over the keys of 12 newly built houses and the “Teachers’ Quarters” to the owners of the respective houses and the Principal.

The SLAF Seva Vanitha Unit donated school uniforms and equipment to the children.

President Rajapaksa who visited a nearby house engaged in a cordial discussion with the residents and inquired into their well-being.