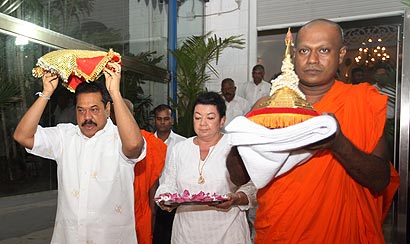 President Mahinda Rajapaksa and Mrs Shiranthi Rajapaksa participated the annual Katina ceremony organized by the Gangaramaya Temple, Hunupitiya, Colombo in the early hours on 08 November. The Katina Perahera (procession) was started from the Temple Trees with participation of the President, family members, Temple Trees staff and large number of devotees of the temple. The Katina Robe, holy relics and other sacred Buddhist objects with flower poles and flags were paraded to the temple.

The Katina dhana along with the Katina Robe was offered to Maha Sanga with great respect and devotion by President Rajapaksa and the members of the dayaka sabhawa. Maha sanga headed by Mahanayaka of the Asgiriya Chapter Ven. Dr Udugama Sri Buddharakkitha Nayaka thero, Chief Incumbent of the temple Ven. Galaboda Gnanissara Nayaka thero and Ven. Dr Kirinde Assaji thero conducted the religious sermons. 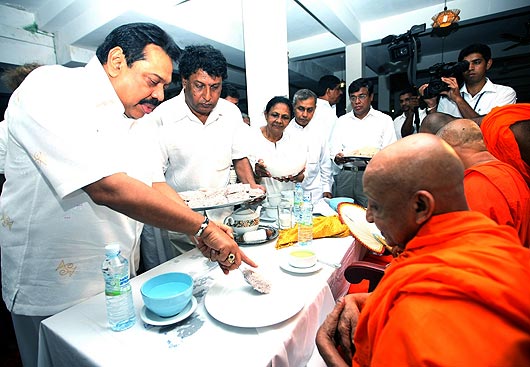