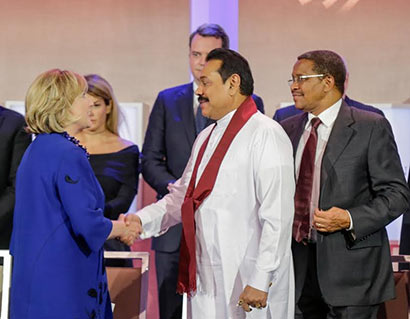 The Sri Lankan President received a warm welcome from the former First Lady and Secretary of State of the United States and the co-founder of the CGI, Mrs Hillary Clinton at the opening plenary session of the event. President Rajapaksa, along with several other heads of state such as Tanzanian President Jakaya Kikwete, joined with Mrs Clinton to support the Elephant Action Network at the annual meeting. President Rajapaksa extended Sri Lanka’s fullest support to the Elephant Action Network that works toward preventing elephant poaching and ivory trafficking around the globe.

The CGI Annual Meeting is an invitation only event held in every September in New York City on the side line of the UNGA, convene more than 1000 heads of state, global leaders in business, chief executives of world renowned companies, civil society organizations, directors of major charities and non-profitable organisations and other global leaders. It was established in 2005 by former U.S. President Bill Clinton. An initiative of the Clinton Foundation, CGI convenes global leaders to create and implement innovative solutions to some of the world’s most pressing challenges.

It is one of the many largest international bodies connected in to line up positive action plans for Political, Social, Economic Development and environmental issues in the developing and third world countries. The present focus of the CGI is in the sectors of Education, Health, Poverty Alleviation and Climate Change. Leaders and law makers from around the world share their effective strategies for addressing the global issues in the world. To date, members of the CGI community have made more than 2,900 commitments to action, which have improved the lives of over 430 million people in more than 180 countries. When fully funded and implemented, these commitments will be valued at $103 billion. Former President of Sri Lanka, Mrs Chandrika Kumaratunga is also a prominent member of the advisory board of the Poverty Alleviation Group of the CGI.

Meanwhile Sri Lankan President Mahinda Rajapaksa will address the 69th session of the UN General Assembly this afternoon at the UN Headquarters in New York. The President will take part in several other international functions and expects to hold bilateral talks with a number of state leaders including the Indian Prime Minister Narendra Modi.