The fundamental rule of international law is that states cannot attack other states, even for humanitarian reasons 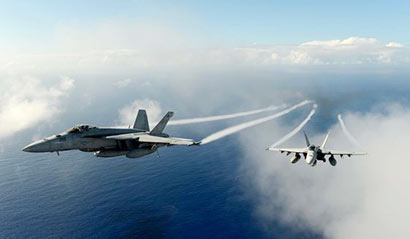 Does US care about violating international laws? Nope. Is there any entity that can take action against US and Allies if they violate international laws? Nope. So what is the use in an UN and its Secretary General or the UN Human Rights head? They simply take home lavish salaries, remunerations and travel VIP and issue statements at all states the US and Allies are against. If so, is there a point in continuing with the UN? That’s a question that the public of the member nations must pose to their governments and decide to walk out of the UN as the current double standards and ugly precedents being created has reached beyond the level of tolerance. Since independence in 1776, the U.S. has been engaged in over 53 military invasions and expeditions and nothing is being done against such illegal actions.

There are only 2 instances that a State can attack another state. A third instance is also being used

Prohibition against the use of force in international law is codified by the UN Charter : United Nations Charter under Article 2(4) which requires states “to refrain in their international relations from the threat or use of force.” To date the UN Secretary General is silent in reading out this act to the US, its Arab Allies and NATO allies.

On 14 August, the UN Security Council passed resolution 2170 deploring the terrorist acts of Isil, and “its continued gross, systematic and widespread abuses of human rights.” The UN Security Council urged all states to protect the civilian population and to cooperate in bringing Isil to justice. There was no reference to the words ‘use all necessary means’ giving US and allies self-right to bomb where and who they like as they did in the case of Libya using the same words.

Since 8 August 2014 – US and Allies have been bombing supposed ISIS targets in Iraq. 200 target hits so far.

America’s illegal acts and violations of international laws are too long to count and include use of atomic bombs, agent orange, DU, white phosphorous etc

The interesting part of all these attacks goes back to General Wesley Clark the former Supreme NATO Allied Commander and Joint Chiefs of Staff Director of Strategy and Policy who said that officials of the Pentagon planned to attack 7 Middle Eastern countries in 5 years. These countries were NOT COINCIDENTALLY – IRAQ, SYRIA, LEBANON, LIBYA, IRAN, SOMALIA AND SUDAN – the very same countries under US sphere of influence.

The MOTHER of Al Qaeda and ISIS is America

Only the ignorant will not believe that US has a long history of arming rebel groups and creating terrorist movements.

During the 1970’s the CIA used the Muslim Brotherhood in Egypt as a barrier, both to thwart Soviet expansion and to prevent the spread of Marxist ideology among the Arab masses.

The US openly supported Sarekat Islam against Sukarno in Indonesia,

The US supported the Jamaat-e-Islami terror group against Zulfiqar Ali Bhutto in Pakistan.

CIA gave birth to Osama Bin Laden and breastfed his organization during the 1980’s. Former British Foreign Secretary, Robin Cook, told the House of Commons that Al Qaeda was unquestionably a product of Western intelligence agencies.

What is surprising is the extent to which Muslims and people indoctrinated into Islam have become gullible and ever ready guinepigs for US and Allies to manoevre them into movements and use them as a weapon of foreign policy.

For the religion of Islam and the followers of Islam this is an area they need to seriously draw their attention towards. Mosques and madrassas have become easy breeding grounds for people and whether women, men or even children they are changing their behavior, attitude and have become easy prey and easy pawns providing free manpower to advance Western geopolitical agendas. This is a very serious issue that Muslims (those that claim to be moderate and desiring to live with other communities must seriously address). However as things stand Islam is drawing large numbers of Muslims and converted Muslims to become bait for the West.

ISIS was created by the US assisted by Saudi Arabia, Qatar and Kuwait.

Does the US really care that one or two of its citizens are getting beheaded? Surely not, because such beheading are all windows of opportunity for Corporate US. What does illegal invasions, occupations end up doing – it burdens only the US tax payer the decision makers have nothing to lose. Since Bush declared the “War on Terror” in October 2001, it has cost the American taxpayer approximately 6.6 trillion dollars and thousands of fallen sons and daughters; but, the wars have also raked in billions of dollars for Washington’s military elite. More than 70 American companies and individuals have won up to $27 billion in contracts for work in postwar Iraq and Afghanistan over the last three years, according to a recent study by the Centre for Public Integrity. According to the study, nearly 75 per cent of these private companies had employees or board members, who either served in, or had close ties to, the executive branch of the Republican and Democratic administrations, members of Congress, or the highest levels of the military

With US occupying Iraq since 2003, are we fools to believe that the US was not aware of an ISIS, when Hillary Clinton herself said Al Qaeda was created by them? US take over of Iraq resulted in dislodging Sunni power and giving power to Shiite regime. The Al Qaeda are mostly Sunnis, the ISIS was earlier known as Al Qaeda in Iraq and with US shift to Syria it became ISIS (Islamic State of Iraq and Syria)

The rebels attacking the Syrian Government are all ISIS thugs which US are promoting because US does not desire a strengthening of Syrian-Russian ties.

America’s involvement in the Middle East has nothing to do with American public interest but everything to do with protecting Israel’s interest in the Middle East. Strikes against Syria and sanctions against Iran are all because of Israel. We would be fools to think that Iran is a regional or even global threat and the only threat before the world is the US and its Allies.

For the rest of the world, it is time the people made greater effort to educate the American public because they will be the key decider in stopping the US and Allies from generating a scenario to create a world war 3.

If all these rebels, terrorist movements have been created by the West and its European and Middle Eastern Allies should the rest of the world simply watch until these rebels are imported into their territories when the next imperial reach becomes their nations?
When the UN Secretary General and the UN Human Rights Head are just figureheads and function more like puppets is there any use in wasting money or time with the UN, should the rest of the world not get together and start seriously thinking about how to protect their nations before the next lot of thugs are unleashed upon their nations?

Politicians throughout the rest of the world may be more concerned about staying in power and counting every penny they make from commissions but they are likely to see the fate that befell Gaddafi if imperial greed is such that when the day comes that these Allies use ‘all necessary means’ we can be sure that the country is doomed.

We do not wish for that tragedy to befall upon any country – it is good for the people to reach out to the American people to start educating the world on the truth.

2 Responses to The fundamental rule of international law is that states cannot attack other states, even for humanitarian reasons

Home » The fundamental rule of international law is that states cannot attack other states, even for humanitarian reasons