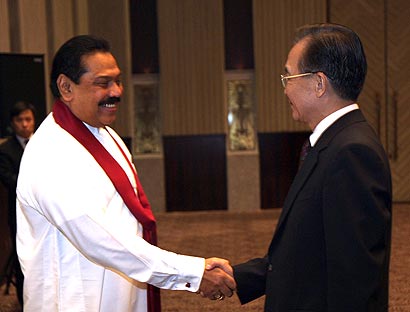 President Mahinda Rajapaksa concluded a bilateral discussion with Wen Jiabao, Prime Minister of China short while ago at Xijiao Guest House in Shanghai on 31 October. President Rajapaksa is currently in China on a two day state visit to participate the closing ceremony of the Shanghai EXPO 2010 trade exhibition. He was invited as a special guest by the government of China along with number of head of states including Finland and Hungary. In the course of this visit, the President took the opportunity to visit the Sri Lankan Pavilion at the EXPO 2010 Trade exhibition. This exhibition will fulfill an important role in facilitating increase bilateral trade between the Republic of China and Sri Lanka and the rest of the world.